Parisians mark one month since Charlie Hebdo attack | Europe| News and current affairs from around the continent | DW | 06.02.2015

Soldiers bearing assault rifles make for a jarring reminder that France has declared war on extremists. Nearly a month after the shootings at Charlie Hebdo magazine, DW correspondent Elizabeth Bryant reports from Paris. 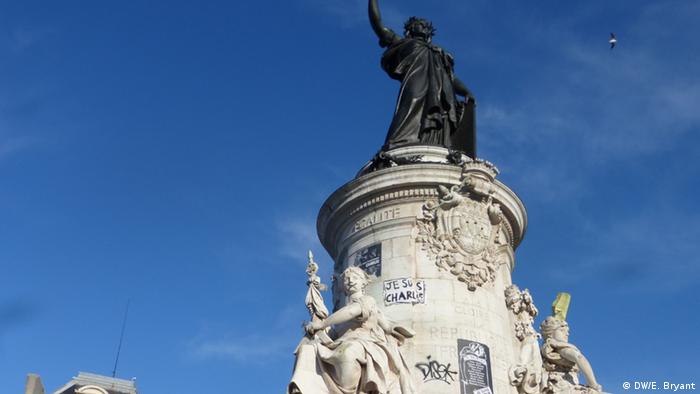 The bouquets have long wilted and fresh graffiti now covers many of the "Je Suis Charlie" slogans sprinkled across the French capital. Tourists gawk at the Notre Dame cathedral and children shriek as they spin around the skating rink in front of city hall. A month after a series of attacks in Paris, a sense of normality has returned here. At least sort of.

The soldiers with assault rifles patrolling the streets are a jarring reminder that France is at war with extremists. So, too, are periodic reports of new arrests of suspects whose profiles are not unlike those of the assailants who killed 17 people during a string of attacks that began January 7 at the offices of Charlie Hebdo magazine and ended on January 9 at a kosher supermarket. And, too, the latest report of three soldiers attacked this week as they patrolled outside a Jewish center in the southern city of Nice.

At Notre Dame, tourists braved the biting cold as they awaited entry. Despite the attacks, many tour operators say they haven't seen a drop in demand. But, asked if the beefed up security here made them feel safer, Gianna and Alicia Casale, a mother and daughter from Italy, shook their heads. "We're a bit scared," Alicia said. "But Paris is too beautiful to stay away from." 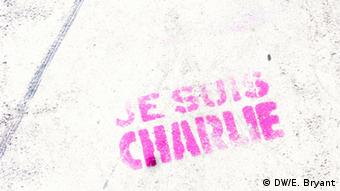 The slogan became ubiquitous in the weeks following the attacks

At Place de la Republique in central Paris, where thousands gathered to stage peaceful rallies following the shootings, Madeleine Favre joined a handful of curious passersby who examined the mostly faded flowers and messages for the victims.

"Of course, it can happen anywhere," said Favre, a native Parisian who was on a short visit from Canada, where she now lives. With a nod to October's attack in Ottawa, she added: "It's just terrorism, it has nothing to do with Islam. But it's how we live now."

But Josefa Suarez, who arrived with a pink rose, disagreed. "We're robbed, we're attacked. These people have no education, they let their kids run wild," said Suarez, a Spaniard who moved here 50 years ago, referring to France's Muslim immigrants. The assailants - whose parents hailed from North and sub-Saharan Africa - shared this background. "The government needs to reduce the birth rate, give them some education."

This is not the first time that French people have felt under siege. During Algeria's civil war in the 1990s, the rebel Armed Islamic Group carried out a series of attacks in France, including a metro bombing in Paris, the former seat of colonial rule, that killed eight people and injured 100. A decade later in 2005, France was again shaken by riots that spread across its troubled banlieues, the poor, gritty and migrant-heavy suburbs that authorities believe are breeding grounds for extremism.

As it did in 2005, the government has again announced a raft of measures to tackle the insecurity, from dispatching more than 10,000 soldiers to guard sensitive sites, to new initiatives to teach secular and republican values at school.

"I agree we need to stress education and school, to transmit the values of tolerance and acceptance of others," said Sylvie, who teaches middle school in a suburb of Paris. "But," she added, in reference to extremist material circulating on the Internet, "we also need to be careful in teaching kids how to be more critical in dealing with all the information they receive."

Despite pleas by government officials, for Jews like Herve Atlan, last month's shootings simply confirm sentiments that France is no longer a safe place to live. Last year, a record 7,000 French Jews emigrated to Israel for a mix of reasons, though some cited anti-Semitism.

"The government makes great declarations - that France without Jews is not France - but there's no action," says Atlan, who lives near the kosher supermarket where Amedy Coulibaly killed four people last month. "We all talk about leaving, but we're attached to this country." 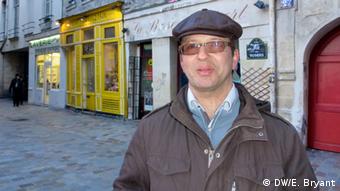 But, for anesthesiologist Alain Soucot, window-shopping this week along the narrow streets of the city's historic Jewish quarter, last month's shootings proved the tipping point. "To be honest, I'm thinking about doing my Aliyah," Soucot said, using a Hebrew word that refers to the immigration of diaspora Jews to Israel. "For several different reasons. My son moved to Israel in September. But the recent events are a warning that we need to be prepared to go."

Jews are not the only ones worried. Truck driver Abdel Fatah, sporting the beard of a devout Muslim, says he also feels targeted. "Islamophobia is a problem," he said. "All you have to do is see the way they look at us."

Near the Seine river, massive banners proclaiming "Paris is Charlie" and "Charlie Hebdo, honorary citizen of Paris" still flank city hall in testament to the irreverent and sometimes crude weekly where 12 people were gunned down on January 7 by the brothers Cherif and Said Kouachi.

A week later, the magazine came out with a defiant "survivors issue" with a cover featuring a caricature of the Islamic prophet Muhammad. It sold several million copies. Charlie Hebdo's subscription base has also soared to 200,000, compared to just over 10,000 before the attacks. The next edition is expected on February 25, and "will probably not" contain more cartoons of the Islamic prophet, its management has announced.

"It's important to let Charlie Hebdo know it needs to keep on with its mission: to give us information, to make us laugh, to desacralize and demystify," said Alain Veaux, who bought a "survivors" copy. "I haven't always agreed with the newspaper, but I think it needs support from all of us today."