Hollande appeals to Jews, 'France is your homeland' 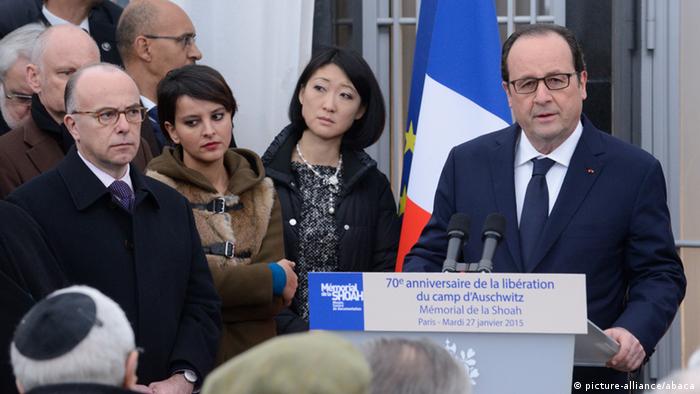 "France is your homeland," Hollande said on Tuesday at Paris' Shoah Memorial and vowed to combat "unbearable" rising anti-Semitism in France.

He delivered his speech before leaving for Auschwitz to mark with other world leaders the 70 years since Soviet troops liberated the Nazi German extermination camp.

"You, French people of the Jewish faith, your place is here, in your home. France is your country," Hollande said, adding that France would protect "all its children and tolerate no insult, no outrage, no desecration."

Hollande's appeal to France's Jewish community of 550,000 coincided with figures published on Tuesday showing that anti-Semitic acts in France doubled last year to 851.

Releasing the figures, the Representative Council of French Jewish Institutions (CRIF) said it was the highest number of departures since Israel's founding in 1948.

The listing included 241 acts of physical violence, the CRIF said.

In contrast, the CFCM council of Muslim organizations said a total of 128 acts of violence and threats were made in the first 12 days after the Charlie Hebdo attack.

During his Paris speech in the presence of five survivors of former Nazi German concentration camps, Hollande expressed "bitterness" that protection had become essential.

"How in 2015 can we accept that we need armed soldiers to protect the Jewish of France?" he asked.

A kosher Jewish supermarket became the target of a third jihadist, who killed four Jewish hostages on January 9 .

Hollande also called on Internet service providers to take action against the spread of anti-Semitism online, saying they could not ignore Holocaust-denial theories disseminated on social networks.

Otherwise, he said, providers would be regarded as "accomplices." New regulations were needed with penalties for providers who did not comply. 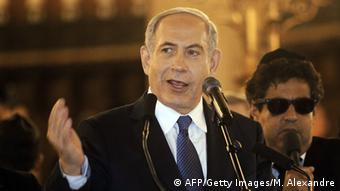 "The big Internet providers must take responsibility. They can no longer close their eyes or they will be considered complicit," he said.

Netanyahu took part in Paris's subsequent mass march against the Islamist attacks, saying "any Jew who wants to immigrate to Israel will be received with open arms."

In Berlin on Monday ahead of Auschwitz liberation ceremonies, German Chancellor Angela Merkel said: "We must not forget. We owe that to the millions of victims."

She said it was "wonderful" that Germany was now home to more than 100,000 Jews.

She added that it was "a disgrace that people in Germany are harassed, threatened or attacked if they somehow identify as Jews or if they take the side of the State of Israel."

This year's anniversary comes as Germany's political leaders struggle to deal with the emergence of anti-Islamization movement PEGIDA since October in Dresden and anti-refugee protests.

In a countermove, tens of thousands have taken to the streets in support of minorities and multi-cultural living in Germany.

Chancellor Angela Merkel's party deputy has called for stricter adherence to the freedom of opinion with regard to PEGIDA. She has also defended, in theory, the right to make the Hitler salute in public. (27.01.2015)

France must come up with 'even-handed' approach, experts say

The number of anti-Muslim incidents in France has soared since the Charlie Hebdo attack. Paris' response - boosting security measures at potential flash points - addresses the symptoms, not the cause, experts argue. (23.01.2015)