The man suspected of a deadly knife attack at the police headquarters in Paris was in contact with conservative Islamic Salafists, the lead prosecutor has said. The suspect had worked for the Paris police since 2003. 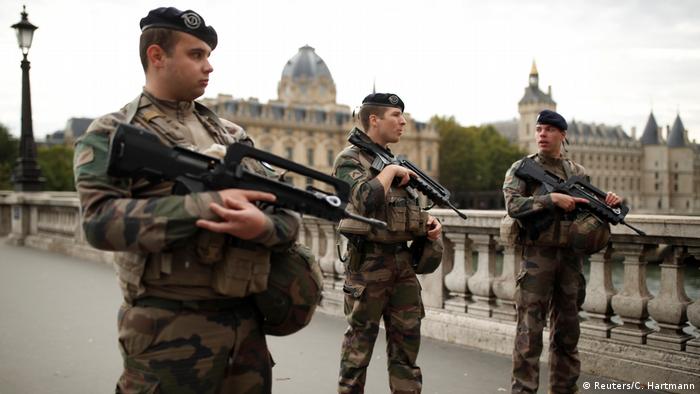 A staffer at Paris police headquarters who killed four colleagues in a knife attack on Thursday seemed to have believed in "a radical vision of Islam," anti-terror prosecutor Jean-Francois Ricard said Saturday.

The assailant, a 45-year-old civilian computer expert who converted to Islam about 10 years ago, was in contact with members of the Salafist Islamist movement, Ricard told reporters.

Police Chief Didier Lallement said on Friday that the attacker, like everyone in the intelligence division, had received a high level of security screening.

He had worked for the Paris police force since 2003 did not have a history of psychiatric problems.

Ricard said the autopsies "attest to a scene of extreme violence" in an attack that lasted seven minutes, adding that the two knives used in the attack had been purchased by the killer.

The man "agreed with certain atrocities committed in the name of [Islam]" and defended the Charlie Hebdo attacks in 2015, Ricard said.

The suspect, who was shot dead in a confrontation with police, exchanged 33 text messages with his wife ahead of the attacks, all of which were of a religious character, Ricard said. The suspect's wife is in police custody until Monday.

Officials have not officially said there was a terrorist motive behind the attack, but handing a case to anti-terrorism prosecutors usually indicates a terrorism link is the focus of inquiries.

Ricard said his office had taken over the probe because of signs the crime was premeditated, the attacker's desire to die and the nature of injuries found on at least one of the victims.

Prime Minister Edouard Philippe told weekly newspaper Le Journal du Dimanche he had ordered inspectors to review the procedures in place in the intelligence department of the police headquarters and anti-terror intelligence unit to detect signs of radicalization among civil servants.

Philippe also defended Interior Minister Christophe Castaner, who has come under attack from French opposition parties, including the far-right National Rally and the center-right Les Republicains. They have called for a parliamentary inquiry into the knife attack, alleging that Castaner had withheld information in the case.

Eric Ciotti of Les Republicains wrote on Twitter that the interior minister had withheld information about the possible radicalization of the Paris police employee.

"Why was he still in the police's service, what confidential access did he have? A commission of inquiry must clarify the state of affairs," Ciotti said on Twitter.

"I am confident in Christophe Castaner, who expressed what he knew at the moment when he spoke," Phillipe was quoted as saying on Saturday.

France suffered Islamist terrorist attacks in 2015 and 2016 that killed 237 people.

The suicide rate among the French police has been stubbornly high for many years. Now the government has bulked up its anti-suicide plan. But officers say that's not good enough. Lisa Louis reports from Paris. (18.12.2018)

An police administrator armed with a knife has killed at least four officers inside police headquarters in central Paris. The attacker, reportedly a longtime civilian staff member, was shot and killed. (03.10.2019)