France is honoring the 130 people who died in the November 13 attacks in Paris. At a ceremony to honor the victims, President Francois Hollande promised France would do everything it can to destroy IS.

Families of those killed in France's worst-ever terror attack, claimed by the "Islamic State" ("IS") group, have joined some of the wounded at the ceremony. In total, more than 1,000 guests are invited.

The ceremony began in the courtyard of Les Invalides, the 17th century building that houses a military museum and Napoleon's tomb. It is the first time civilian victims have been honored at the complex, which is normally reserved for the honoring of members of the armed forces

A giant screen displaying photos of the victims of the attacks on November 13. The names of all the victims were then read out loud, followed by a minute's silence.

In his subsequent speech Hollande promised "solemnly that France will put everything it has into destroying the army of fanatics that has committed this crime..." 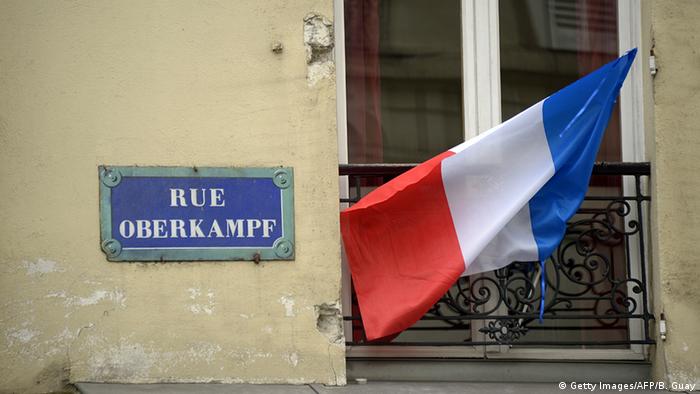 Many houses displayed the French flag on Friday

In the run up to the commemoration, Hollande called on the French to hang out the nation's flag. "Every French citizen can take part [in the tribute] by taking the opportunity to deck their home with a blue, white and red flag, the colors of France," government spokesman Stephane Le Foll quoted Hollande as saying.

But some victims' families said they will snub the event, accusing the government of failing to tighten security after terror attacks in January, when jihadist gunmen killed 17 people in Paris, mainly at the Charlie Hebdo satirical magazine.

On the night of November 13, Islamist terrorists killed 130 people during attacks at the Stade de France sports stadium, the Bataclan concert venue and several cafes and restaurants in Paris.

Hate mongers in several European countries have been targeting Muslims after the Paris attacks. Experts say there is an urgent need to stop demonizing one religious community and develop strategies for reconciliation. (26.11.2015)

Merkel vows to help France in fight against 'IS' terrorism

French President Francois Hollande returned to Paris from a diplomatic tour driven by the November 13 attacks. He met with German Chancellor Angela Merkel, who pledged further assistance in the fight against terror. (25.11.2015)

Opinion: An epoch-making year of crisis

It's reminiscent of the Cold War. The shooting down of a fighter plane has become the headline issue of global politics. It's a sign of how tricky the current situation is, says DW editor-in-chief Alexander Kudascheff. (26.11.2015)