Parisian police say they made scores of arrests amid violence in the wake of Paris Saint-Germain's Champions League final defeat to Bayern Munich. Officers used tear gas to break up rampaging fans in parts of the city. 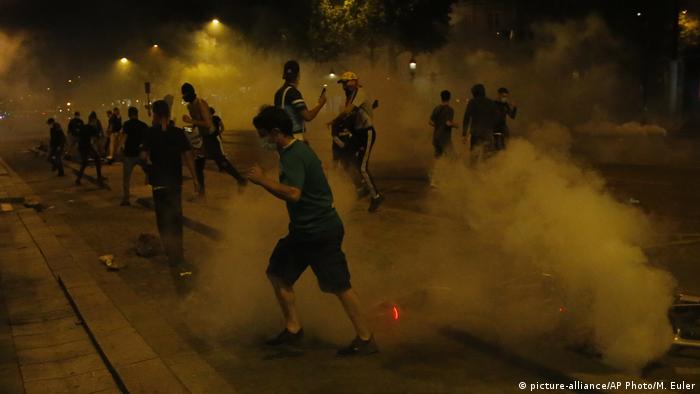 Police in the French capital on Monday said they had made 148 arrests in the violence after a Champions League final that saw Paris Saint-Germain (PSG) defeated 1-0 by Bayern Munich.

Thousands of fans converged on the team's Parc des Princes football stadium to cheer on their team in the final, being held in Lisbon. Others gathered around the Champs-Elysees.

Scuffles broke out outside the ground after the match, which saw French international Kingsley Coman clinch a win for the Bavarians with a 59th minute header.

Some supporters threw projectiles at police, who responded with tear gas. Rioting also ensued along and around the Champs Elysees boulevard, where shop windows were smashed and cars were set ablaze.

"The savagery of certain delinquents from last night: 16 members of the police forces injured, 12 shops attacked, around 15 cars vandalized," Darmanin wrote on Twitter.

Social distancing measures were also ignored among fans outside the stadium, who had been hoping to see their soccer team win Europe's top club competition for the first time. Police said they issued 404 fines for people not wearing face coverings in places where they are compulsory. 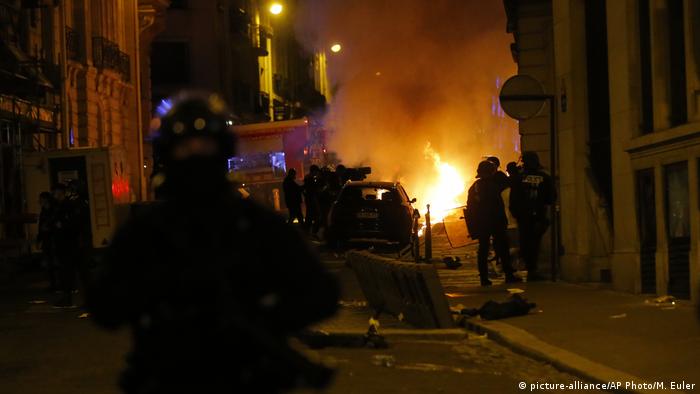 Deputy Mayor Nicolas Nordman tweeted that the acts of violence were "intolerable."

"Their authors have nothing to do with football lovers, with PSG, and with Paris. They must be condemned."

Paris Mayor Anne Hidalgo had called for there to be "mature celebrations" should PSG beat Bayern. Supporters clashed with police after PSG's 3-0 win over RB Leipzig in the semi-finals the previous Tuesday.

The scenes in Paris contrasted with those in Munich, where hundreds of supporters took to the streets to celebrate the victory. A Munich police spokesperson described a quiet situation with "no major problems."

A minute’s silence for a deceased fan at a fourth-division football match is causing controversy in the German state of Saxony and beyond. The fan in question was a well-known hooligan and far-right activist.

In the West, many people are wondering if mass brawls among fans will mark the World Cup in Russia. Russian fans have a negative image in Europe, with many remembering the riots in Marseille during the 2016 European Cup.