Parents of disabled children in Poland receive very little federal assistance. Even the help they do get ends at age 18 — a practice that has been deemed unconstitutional. Now parents are demanding more state support. 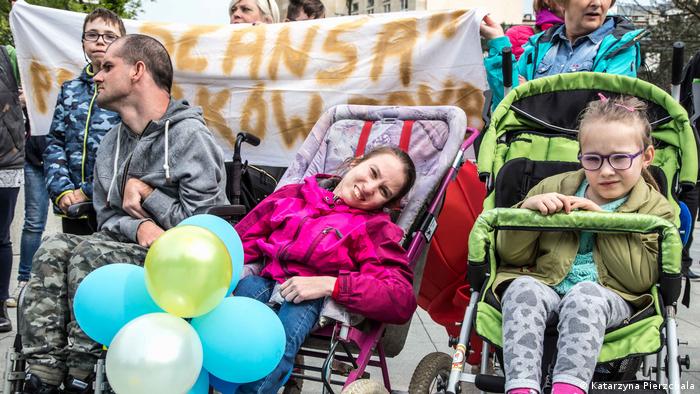 For the last week, the halls of the Sejm, Poland's lower house of parliament, have been occupied by the parents of disabled children. They are refusing to leave the building until their calls for more federal support are addressed. They are sleeping on the floors and caring for their children every day. Throughout that time the children's physiotherapists have often been denied entry into the building. More parents have been gathering on the streets outside with their children. But they, too, have been denied entry.

Krysztof Marciniak stands behind his son Grzesiek, who is sitting in a wheelchair. Grzesiek is 42 years old. He has Down syndrome and epilepsy. He smiles happily, raises his hand and gives the victory sign. His father has a less optimistic demeanor. "My Grzesiek has always spent his days at the local community center, it is the only way for him to take part in everyday social life," he says. "But now the community center in our neighborhood is being closed after 25 years. No one cares about people like us."

He also says he had to pay for his son's new wheelchair out of his own pocket because people suffering from Down syndrome or epilepsy receive no financial aid for them. The fact that Grzesiek has difficulty walking is not drastic enough for the state to help his family. For years, Krysztof Marciniak led a Warsaw association fighting for the rights of the disabled. Now, standing among the mass of protesters, he feels defeated. "We achieved nothing," he says. "We always have to go back and start from square one. We always have to fight." 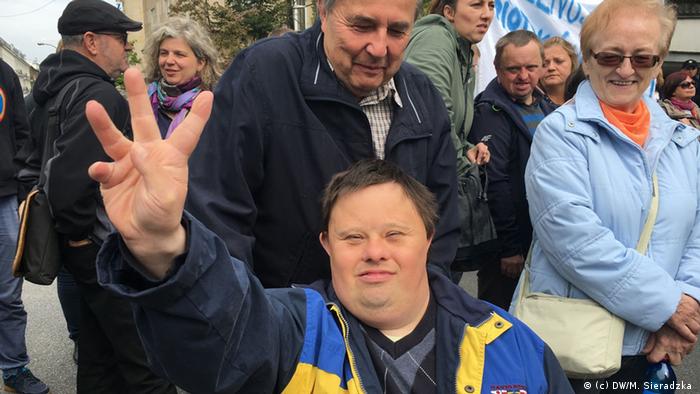 Other demonstrators feel the same. "This isn't a new protest, we are just continuing the old one," says Iwona Hartwich, the protest spokeswoman. It was exactly four years ago that the parents of disabled children first occupied the Sejm — their demands were almost the same then as they are now.

People who choose not to work in order to care for a disabled child receive €350 ($424) per month from the Polish government. But they can only receive that money if they have no other income, which means they cannot take part-time work. Yet, as soon as the child turns 18, even that meager payment expires. Back in 2014, Poland's Constitutional Tribunal deemed the rule unfair, however, the country's ruling national-conservative Law and Justice party (PiS), as well as its liberal predecessors, simply ignored the court.

In practice, that means parents who forfeited working so they could care for their sick children are robbed of their only source of income simply because the child turns 18. That is just one of the reasons that parents have flooded into Warsaw. They are also calling for the introduction of a €130 monthly care allowance, as well as an increase to the social security pension for disabled people, which currently stands at €170 per month.

The government is only interested in compromising on the latter — raising the social security pension from €170 to €260 per month. Those affected say that is too little. 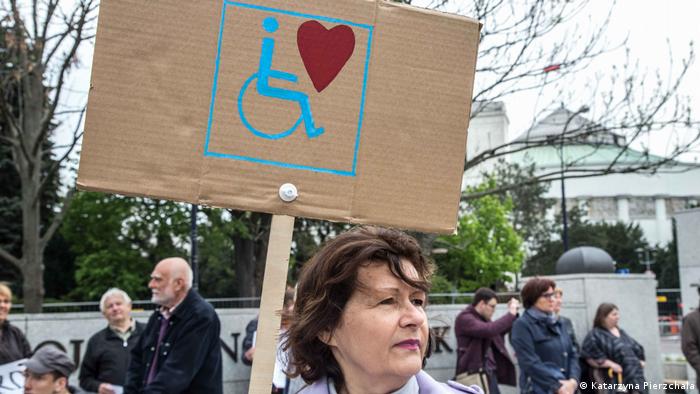 Once a child turns 18, parents in Poland no longer receive state support

Many parents find the way in which the PiS portrays federal assistance for disabled children and their parents utterly cynical. In 2016, the ruling parliamentary majority passed a bill that envisioned a one-time payment of €1,000 for the birth of a disabled child. "But the ruling party could care less about what happens to the child and its parents for the rest of their lives," says an angry mother protesting outside the Sejm with her son. She holds a sign with the words: "Humanity is measured by how one treats the weakest among us."

Although parents occupying the Sejm receive visits from politicians, none offer solutions to their problems. When President Andrzej Duda came to encourage parents to keep up the fight he was shown videos of his own election campaign. At the time, he loudly proclaimed that he would fight for the rights of the disabled but he has done nothing to help them or their families since then.

Prime Minister Mateusz Morawiecki promised protesters a "road map" but cautioned that federal coffers were empty. Nevertheless, the parents have no intention of giving up. More protests are planned.