President Mahmud Abbas has said the Palestinian territories cannot abide by the Oslo agreement because of Israel's reluctance to commit to the deal. Israeli PM Netanyahu has condemned Abbas' speech as "deceitful." 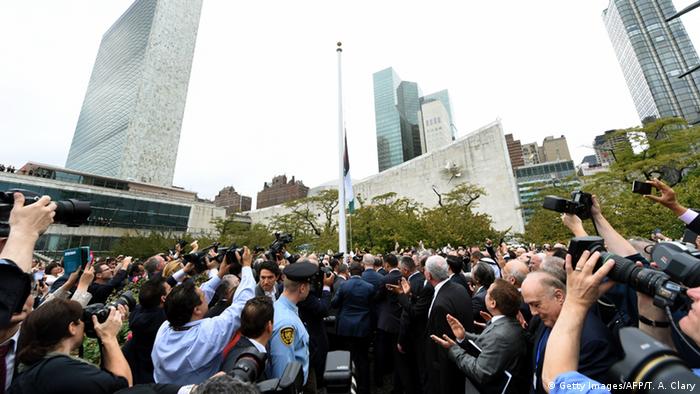 "We declare that as long as Israel refuses to commit to the agreements signed with us… leave us no choice but to insist that we will not remain the only ones committed to the implementation of these agreements, while Israel continuously violates them," Abbas said, addressing world leaders gathered at the UN General Assembly in New York on Wednesday.

"We therefore declare that we cannot continue to be bound by these agreements with Israel and that Israel must assume all of its responsibilities as an occupying power," he added.

Abbas also warned about the "grave dangers" in Jerusalem, "where Israeli groups are committing repeated, systematic incursions upon Al-Aqsa Mosque." The Al-Aqsa compound has been a volatile site in recent weeks, with Jewish religious groups making visits to what they refer to as Temple Mount and Muslim youth clashing with Israeli police.

Israel's prime minister, Benjamin Netanyahu, lashed out at President Abbas, saying his speech was "deceitful" and encouraged "incitement and destruction of the Middle East."

Palestinian flag flies at the UN

Palestinians also raised their flag at the UN for the first time on Wednesday (pictured above).

"I wish to express, on behalf of our people, deepest gratitude to the countries that voted in favor of the resolution enabling us today to raise the flag of the State of Palestine at United Nations Headquarters," Abbas told the General Assembly.

Members of the UN General Assembly on September 10 voted in favor of allowing the flags of Palestine and the Vatican to be flown in the UN Headquarters. The two countries have observer status in the organization. One hundred and nineteen nations backed the resolution, 45 abstained from voting and eight countries, including Israel, Australia and the US voted against.

Israel has bolstered security measures against stone throwers, including broadening the use of live fire. Israeli Prime Minister Benjamin Netanyahu said the move applies to "all Israeli citizens and residents of Israel." (24.09.2015)