The UN General Assembly has overwhelmingly approved the Palestinians' proposal to raise their flag over the UN in New York. The move is seen as a symbolic step in the pursuit of statehood. 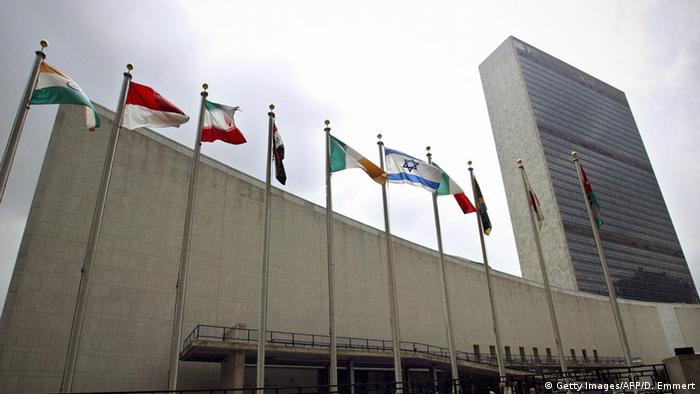 The UN General Assembly approved a resolution Thursday to raise the Palestine and Holy See national flags over strong objections by Israel.

The resolution - introduced by Palestine - allows non-member observer states - in effect Palestine and The Vatican - to raise their flags over the UN building. The measure passed with 119 votes in favor out of 193 UN members in the General Assembly.

"It's a step to the recognition of Palestine as a full member state of the United Nations," Palestinian Prime Minister Rami Hamdallah told reporters in Paris earlier on Thursday.

The EU was split on the issue with most of the 28 members - including Germany - abstaining, though France and more than half a dozen others voted in favor.

"We need to mobilize a new dynamic to preserve the two-state solution," French Prime Minister Manuel Valls said in Paris. "We have to reduce tension on the ground and restart a credible dialogue."

The United States, Canada and Australia joined Israel and four other countries in opposing the measure, arguing that it is premature to recognize a Palestinian state before Israeli-Palestinian peace talks, though that process has been frozen since last year's deadly conflict in Gaza.

Some 135 countries - the vast majority in Asia, Africa and Latin America - recognize the state of Palestine as a sovereign state. In late 2012, the General Assembly voted 138 in favor and nine against, to upgrade the Palestinians' status at the UN to non-member observer state.

The Vatican has distanced itself from the resolution.

Dozens killed across Gaza as Israel agrees to short ceasefire

Dozens of Palestinians have been killed in Israeli airstrikes across the Gaza Strip including a strike on a UN school. The Israeli army has agreed to a four-hour humanitarian ceasefire. (30.07.2014)