Malala Yousafzai, Pakistan's Nobel Peace Prize recipient, has visited her home town of Mingora, where a Taliban militant shot and wounded her in 2012. Security officials said her visit by helicopter was for only one day. 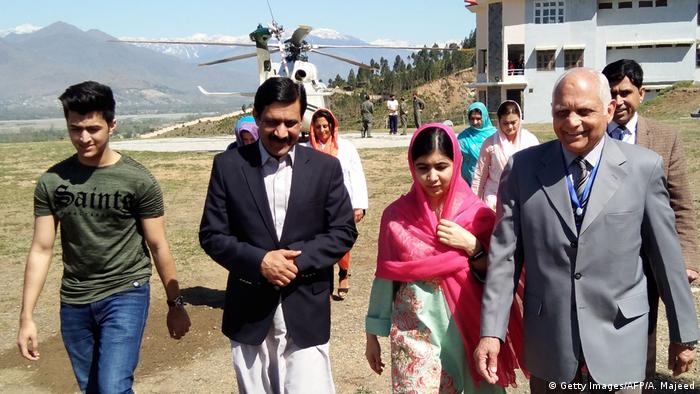 Malala in the red headscarf arriving in Mingora

Malala Yousafzai, who is acclaimed internationally as an icon for girls' education, was flanked by heavy security Saturday as she briefly visited her home in Pakistan's restive Swat Valley.

The tearful 20-year-old, who was 14 when shot in a school van and airlifted to Britain for treatment, was consoled by her accompanying father Ziauddin Yousafzai.

Roads were blocked off as the helicopter landed at a government guest house about one kilometer (half a mile) from her former home.

Also accompanying her was her brother Atal Yousafzai and the principal of all-boys Swat Cadet College, Guli Bagh (both left in picture above).

An uncle said she also planned to meet with friends and relatives before returning to Britain on Monday.

In 2012 — after Pakistan's army had wrested back much of the Swat region from the Taliban — a gunman boarded her school van, asked "Who is Malala," and shot the widely known teenage advocate of girls' education.

She had written an anonymous blog for the BBC Urdu service as a schoolgirl during the Taliban's harsh imposition of Islamic law.

Two other students were also hurt in the attack, however, the ensuing trial culminated in numerous suspects being acquitted.

Malala was treated in Birmingham, where she completed her schooling and, in 2014, became the youngest-ever winner of the Nobel Peace Prize.

Now an Oxford University student, Malala told Pakistani Geo TV on Friday that conditions had improved and she planned to one day run for prime minister after completing her education.

"It is my country and I have equal rights in it like any other Pakistani," she said.

On Thursday, she was in tears as she delivered a speech saying it was a "dream" to be back in her home country after so many years.

Public opinion on Malala is still divided in Pakistan, where some conservatives accuse her of being a Western agent, intent on shaming her country.

"Pakistan has not done well by its heroes," wrote the English-language Dawn newspaper on Friday.

Women's rights advocates, including Nighat Dad, said their meeting with Malala on Thursday – kept secret until the last minute – had been a highlight.

The 19-year-old Pakistani woman shot to international fame five years ago after recovering from a gunshot wound to the head. She was wounded by a Taliban gunman who opposed her advocacy of education for girls. (13.04.2017)

The insurgents have vowed to take a more moderate stance as they seize control of Afghanistan but both the UN and Germany have expressed skepticism. EU foreign ministers are holding emergency talks. DW has the latest.