Pakistan′s economy battered by floods and political unrest | Asia | An in-depth look at news from across the continent | DW | 17.09.2014

Devastating floods and weeks of political turmoil have dealt a heavy blow to Pakistan's already struggling economy, with damages potentially adding up to tens of billions of dollars, as analyst Athar Hussain tells DW. 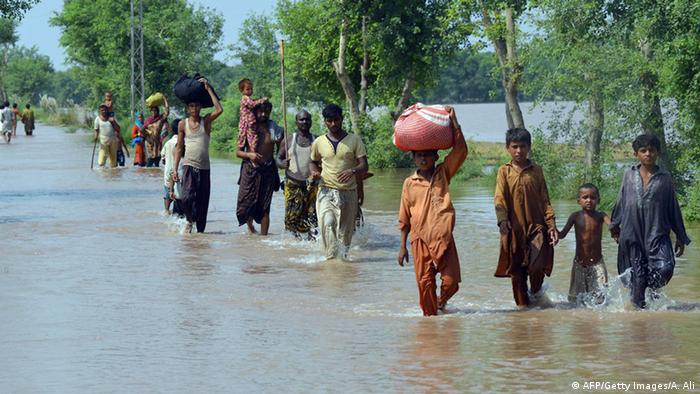 Talks to end a month-long sit-in by anti-government protesters in Pakistan remain deadlocked after authorities arrested dozens of demonstrators. The South Asian country has been facing political turmoil over the past weeks ever since opposition politicians Imran Khan and Tahir-ul Qadri led mass demonstrations against the democratically elected government of PM Nawaz Sharif, whom they accuse of incompetence and rigging last year's parliamentary vote.

The ongoing unrest is also the reason why China's President Xi Jinping postponed a trip to the country this week, a visit in which both nations were expected to sign deals worth 34 billion USD. Moreover, monsoon floods ravaged more than 3000 villages in parts of Pakistan-controlled Kashmir and the Punjab province, in which more than 300 people are reported to have died.

Athar Hussain, Director of the Asia Research Centre at the London School of Economics, says in a DW interview that while the ongoing protests have effectively almost totally paralyzed the functioning of the government, the floods have devastated parts of the country's agricultural heartland, a key area for economic growth which could lead to billions of USD in damages. But in order to tackle the key issues undermining growth, the government must implement reforms, he adds.

DW: What impact have the weeks-long protests had on Pakistan's economy?

The protests have completely paralyzed the working of the central government in Islamabad. Many of the government's ministries cannot function, and the prime minister is working from his country house rather than the capital. 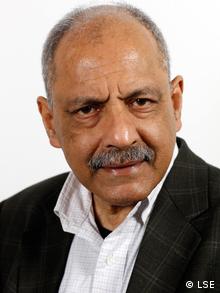 But it is important to point out that the turmoil hasn't had much of an economic impact as the Pakistani government hadn't been doing much to improve the economy even before the protests kicked off. So the shutdown of government has not had a drastic effect on the state of the economy.

Chinese President Xi Jinping postponed his visit to Pakistan due to anti-government protests. 34 billion USD of deals were scheduled to be signed during Xi's visit. What effect is this likely to have on Pakistan's economy?

China is Pakistan's largest trading partner and Beijing is interested in a stable Pakistan mainly because it wants to maintain a balance in South Asia – particularly between New Delhi and Islamabad. But it is not easy - Pakistan is facing grave social and economic problems. So the postponement of Xi's trip will obviously aggravate things, and the deals between Beijing and Islamabad will be delayed. Having said that, in terms of bilateral trade China is important for Pakistan, but not so much the other way around.

Parts of the country, especially in the east and northeast have been ravaged by floods. What damage have they inflicted in economic terms?

Growth in the agricultural sector has been severely affected given the vast area covered by the floods and the importance of the Kashmir and Punjab area as Pakistan's "bread basket." The flooding has damaged the province's canal system which is used to irrigate the lands. According to the preliminary estimates, 20 to 30 million people have been affected by the latest inundation. Agriculture accounts for a significant part of the country's GDP, so we are looking at damages potentially adding up to billions of US dollars.

Once again, floods have ravaged parts of India and Pakistan. Those who are affected by the calamity still need relief. However, the frequency of the floods in the region tells us it can't be just a natural disaster. (15.09.2014)

Pakistan's powerful military has said it will step up efforts to resolve the country's weeks-long political crisis. But analyst Aqil Shah tells DW, the army is fueling the turmoil in a bid to send a signal to PM Sharif. (01.09.2014)

Pakistani police have clashed with thousands of demonstrators marching on the official residence of the prime minister. The protesters are demanding that the premier step down over alleged voter fraud. (29.08.2014)

Japan is the most efficient among Asian nations in transforming creativity into economically viable innovations, according to a new index. Analyst Shanti Jagannathan talks about how the index can also serve policymakers. (12.09.2014)

In this context we must also take into account that thousands of farmers in the flood-hit areas were still recovering from the devastating impact of last year's floods. These are mostly poor peasants who lost everything and are now faced an ever bigger challenge. On top of that, the people in the region are now faced with the risk of disease due to countless bloated livestock carcasses floating in the floodwaters.

What are the foremost challenges currently facing Pakistan's economy?

Every kind of major challenge you can think of. For example, Pakistan has experienced record population growth and significant migration to urban areas in the past years. However, the country hasn't been able to provide employment to a huge part of the labor force.

There is also the problem of underinvestment in infrastructure. Pakistan has thus far been unable to generate economic growth out of its increased urbanization. On top of that, many of the country's industrial clusters are not environmentally friendly and have weak infrastructure services. As a result, the country's GDP growth has been weak and its industrial sector cannot compete with a number of under-developed countries.

Moreover, all forecasts say that Pakistan will be worse-affected by climate change in the coming years.

How willing are foreign companies to invest in Pakistan given the current political turmoil and the country's history of coups?

Social and political conditions in Pakistan work against long-term commitments from foreign investors. The political parties that govern the country are responsible for failing to create a situation where the economy can expand. For example, most politicians don't even pay taxes and create loopholes in the legislation as political favors to the country's rich and powerful. 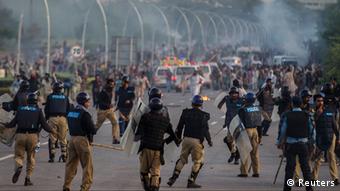 Hussain: 'Nobody wants a military coup in Pakistan'

An indirect factor deterring investors is the country's strategic location in South Asia. Because of its geopolitical importance, Islamabad has been able to get foreign aid easily, which allows it to keep postponing economic reforms and partly hampers economic development.

What does the government need to do to get the economy back on track?

But most importantly, Pakistan must continue with the democratic process to get back on track. Good governance will not come immediately; it has to develop. The only good thing about the current political crisis is that it seems that nobody wants a military coup in Pakistan.

Professor Athar Hussain is the Director of the Asia Research Centre at the London School of Economics.