Pakistani gives street kids the gift of education | Asia | An in-depth look at news from across the continent | DW | 07.05.2014

Muhammad Ayub has been running his own free school for street children in a park in Islamabad for 20 years. The volunteer teacher says he's just trying to improve the opportunities for Pakistan's 'have-nots.' 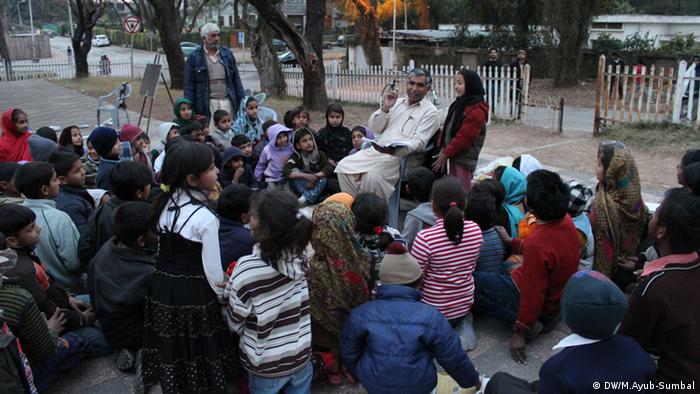 It's a chilly morning in Islamabad, and Muhammad Ayub's pupils are dutifully reciting their first lesson of the day. The class is taking place, as always, in a city park just around the corner from Islamabad's well-known Kohsar Market. Ayub has been running this school for poor children for nearly two decades. It's become his vocation.

"Everyone who is already educated must help educate illiterate people in their homes, in their towns, in their cities and other places where they are," Ayub says. "If they teach one word every day, then [you will] see, little by little, how we can overcome the education gap in our country."

Those who can afford it send their children to elite private schools with fees running to thousands of Pakistani rupees per month. The rest have to rely on under-financed government schools to educate their children.

Without Ayub's street school these kids would never get access to education at all.

Ayub isn't a trained teacher. After his parents died, he had to care for his siblings and educate and feed them. He came to Islamabad looking for a job and worked as a laborer, "anything to help feed my family and afford the expenses of my own education."

During the months it took him to find a stable job, he became aware of the poverty around him.

"I used to see so many children in the streets, picking rags or just selling the few possessions they had found or made. I asked these children why they didn't go to school, and they told me that their parents couldn't afford to send them to schools."

That's when Ayub started offering free lessons. It was the beginning of a journey, he says. 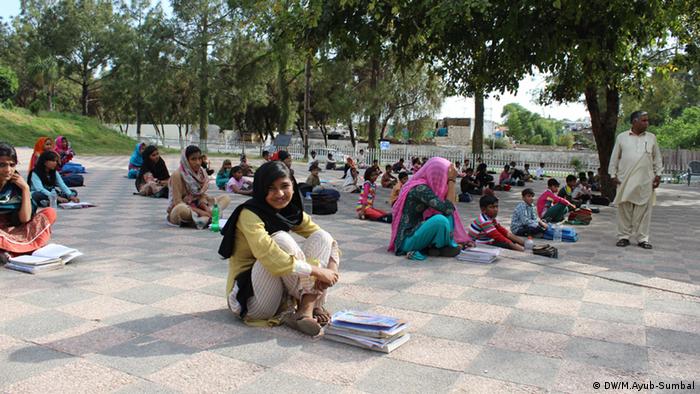 Ayub's pupils probably wouldn't get an education, were it not for him

First he had to contend with hostility from many of the wealthy residents in the surrounding areas in the beginning. They didn't want to see street children gathering in the local park.

"Some people called me a spy, some called me a foreign agent, some thought I was a Christian," Ayub recalls. "But when I started teaching the children, everyone went quiet."

He began with three pupils, three notebooks and three pencils.

Almost 20 years later, the school is a permanent fixture in the community. Two-hundred and forty pupils are enrolled, most of whose parents work in the bungalows of wealthy people in the neighboring areas.

The school has earned Ayub respect in the neighborhood, and though he still doesn't get any proper funding, donations of books or stationary come from passersby who see him teaching in the park. And many former pupils return to help Master Ayub and share their knowledge.

Farhat Abbas is one of them. 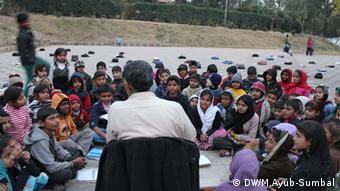 "I used to work in the forest, cutting wood which I would then sell in the market," he explains. "Master Ayub took me in because my parents didn't have the financial resources to educate me."

Ayub's teaching opened new doors for Abbas, who is now at university. Other former pupils have gone on to work in office jobs in the capital, a far cry from their beginnings.

Ayub's motivation for working as a volunteer teacher remains the same now as it was when he started. He says he feels that education in Pakistan is inherently unfair.

"The elites and the rich children have the highest standards and access to the best schools and colleges," he says. "For the poor student it is hard for them even to buy books or paper. This division between the 'haves' and 'have-nots' has destroyed the education system in Pakistan and made opportunities unequal.

A police station run by women in Pakistan is filling an important role in a society dominated by men. Chief Bushra Batool says it's become a place of last resort for the desperate. (16.04.2014)

No birth certificate means no rights for millions of children

The birth of every third child under the age of five has never been officially registered, a new UNICEF report says. These minors often have no access to education or health care, and are easy prey for human traffickers. (12.12.2013)

A girl with a big story and bigger dreams

A year after being shot, Pakistan's teenage champion of girls' education has been awarded the EU Sakharov Prize for Freedom of Thought at a ceremony in Strasbourg. (20.11.2013)

Andeisha Farid grew up in refugee camps after her family fled Afghanistan in 1983. She returned to her home country because she felt compelled to share the opportunity she'd received: getting an education. (01.10.2013)