Armed men have attacked the Pakistan Stock Exchange building in Karachi, according to local police. All four of the attackers and at least two civilians were killed in the attack. 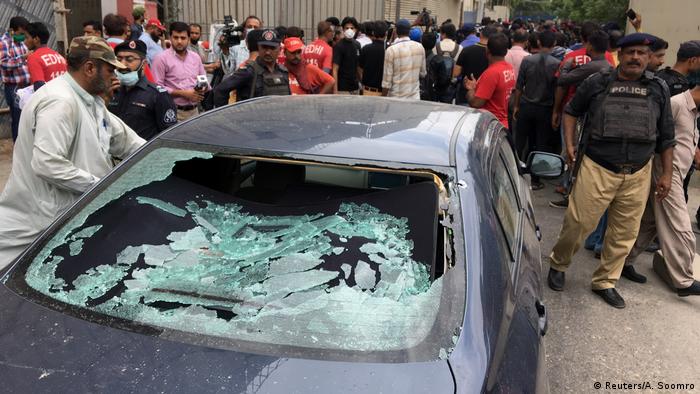 Armed men attacked the Pakistan Stock Exchange building in Karachi on Monday, killing at least three people — two guards and one policeman — as well as the four assailants, according to police. Karachi police chief Ghulam Nabi Memon said the attackers pulled up in a car outside the trading floor and hurled a grenade at the building before opening fire.

Rizwan Ahmend, a police official at the scene of the attack said that gunmen opened fire at the entrance and entered the stock exchange grounds. It was not immediately clear if more assailants are at large.

"There was one policeman who lost his life," Karachi-based journalist Yusra Askari told DW. "We do know that several security guards are among the injured. They have been moved to hospitals across Karachi."

Heavily armed special forces have surrounded the building, and local television stations have shown police in full body armor surrounding the structure. Shazia Jehan, a police spokesman, said a bomb disposal squad had also been called to the building and was trying to clear it of explosives.

"Aerial surveillance of the area is underway and all roads leading to the Karachi Stock Exchange have been cordoned off for security purposes," said Askari.

An alleged claim of responsibility

Additionally, the Majid Brigade of the Balochistan Liberation Army (BLA) took responsibility for the attack. The BLA is an armed insurgent group advocates for the independence of Balochistan province from Pakistan.

"The Balochistan Liberation Army is being funded by India," defense analyst Amjad Shoaib told DW. "Baloch insurgents are being supported and trained by Indian intelligence agencies. The Pakistani government expected that such an attack could be perpetrated. Authorities are now taking an action against those involved in it." The claim of responsibility has yet to be confirmed.

Meanwhile, some critics say that the Pakistani government has a responsibility to do more to address the root of such attacks.

"Sindh and Balochistan [provinces] are being governed [by Islamabad] like colonies," Abdul Khaliq Junejo, a Sindhi nationalist politician, told DW. "People find different ways to resist… some use peaceful means and some use violence. It is the responsibility of the [Pakistani] state to address their grievances."

Khurrum Ali Nayyar, secretary-general of the Awami Workers Party in Karachi, believes that a lack of "room for political dialogue" contributes to the prevalence of such attacks.

"It is easy to condemn today's attack, but we must also talk about social and economic exploitation in Balochistan," Nayyar told DW. "Those who talk about these issues are targeted by the state. Baloch politicians who believe in peaceful political struggle have been marginalized."

Read more:Is the space for critical thinking shrinking in Pakistan?

Karachi is Pakistan's financial center, and home to the Pakistan State Bank, as well as several national and international financial institutions.

DW's Shahzeb Jillani said the attack at the country’s financial heart was "hugely symbolic with the economy in a shambles."

Monday's attack comes more than a week after a grenade was thrown at a line of people waiting outside a government welfare office in the city, killing one and injuring eight others, according to a statement from municipal authorities.

Pakistan: How the 'audio leaks' scandal has discredited politicians 03.10.2022

Secret recordings of politicians have cast a negative light on the government and opposition parties amid worsening political turmoil in the South Asian country. Who is the ultimate beneficiary of these audio leaks?