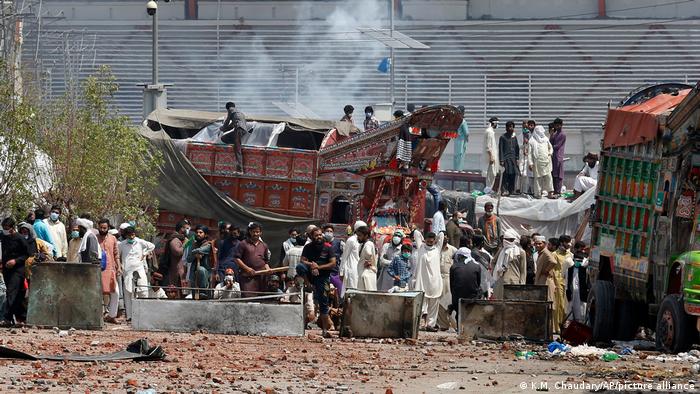 At least three supporters of the recently banned far-right Tehreek-e-Labiak Pakistan (TLP) were killed in Lahore on Sunday during clashes with the police, Pakistani newspaper Dawn reported.

Amid a crackdown by the police, TLP supporters have protested in Lahore over the past few days, demanding the expulsion of the French ambassador over publication of cartoons of the Prophet Muhammed.

Five police officers were taken hostage and at least 11 officials were hospitalized for their injuries after "brutal torture" by TLP members, Dawn cited a police spokesperson as saying.

A TLP leader said in a video statement that several party members were killed and others injured as security forces attacked their protest.

"We will not bury our dead till the French ambassador is expelled," TLP's Shafiq Ameeni said in a video message.

How did the situation escalate?

In a vague statement, authorities said that officers were trapped in a police station under attack by armed criminals who stole an oil tanker.

"Police did not plan or conduct any operation on the mosque... The action, if any, was in self defense and to protect public property," the police statement read.

"The operation against the protesters has been halted for a while to avert any untoward situation as they are armed with petrol bombs and a 50,000 oil liter tanker," Rana was quoted as saying by Arab News.

Videos circulated on social media platforms showed a violent and deadly crackdown by the police on protesters.

Over the past week, police arrested hundreds of TLP protesters. The arrest of the party leader, Saad Rizvi, further fueled the tensions.

The death toll is unclear, but several casualties have been reported.

What are people protesting?

Protests erupted across Pakistan as the radical Islamist party was outraged by French government support for the publication of cartoons depicting Muhammad.

Police had arrested Rizvi on Monday for giving the government an ultimatum to expel the French ambassador or face protests.

Pakistan's Prime Minister Imran Khan said the government did not ban the TLP because it disagreed with the party's sentiments but rather because they "used street violence & attacking the public and law enforcers."

President Emmanuel Macron had defended the right for magazines to publish images of Prophet Muhammad, which the TLP and several other Muslims have deemed offensive.

The French Embassy in Pakistan's capital Islamabad has advised its nationals to temporarily leave the country over "serious threats."

According to the French AFP news agency, many of the French nationals it contacted in Pakistan seemed to not want to leave. They reportedly questioned the timing of the embassy's message after he Pakistani government banned the TLP.

Some AFP interviewees criticized how the embassy's message delivered a negative image about Pakistan.

Umer Ali contributed to this article.

Tens of thousands of Muslims have marched in several cities in anger at Paris' decision to protect the right to caricature the Prophet Muhammad. France is still reeling from two deadly knife attacks, blamed on Islamists.

The far-right Tehreek-e-Labbaik party has called off a march on the capital, and the government has said allowing the party back into the political mainstream is in the "national interest."