The embassy said all French nationals and companies should temporarily leave the country. The move follows violent anti-France protests earlier this week. 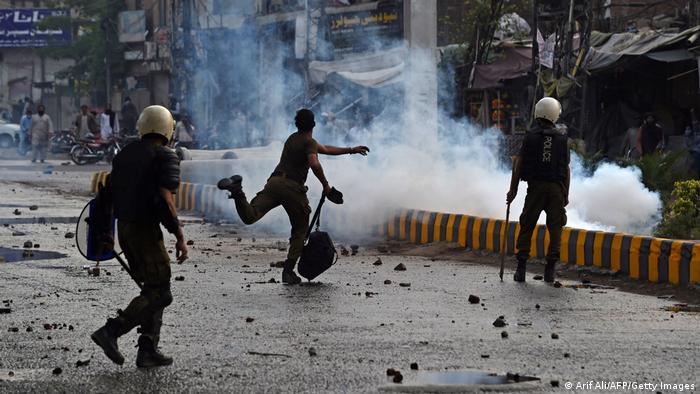 People took to the streets to protest in Lahore, Pakistan on April 12

The French Embassy in Pakistan on Thursday advised all French nationals and companies to temporarily leave the country, following violent anti-France protests this week.

"Due to the serious threats to French interests in Pakistan, French nationals and French companies are advised to temporarily leave the country," the embassy said in an email to French citizens.

"The departures will be carried out by existing commercial airlines."

Thousands of Islamists clashed with police earlier this week in a demonstration against the arrest of Saad Rizvi, leader of hard-line religious group Tehreek-e-Labiak Pakistan (TLP). The Islamist cleric had threatened protests unless Pakistan expelled the French ambassador.

On Wednesday, the Pakistani government moved to ban the TLP. Rizvi was detained hours after making his demands, bringing thousands of his supporters to the streets in cities across Pakistan.

The TLP are known for holding dayslong, violent street protests over blasphemy issues, and causing major disruption to the country.

Blasphemy, the main cause touted by the TLP, is a sensitive issue in the conservative country. Anyone deemed to have insulted Islam or Islamic figures could face the death penalty or a hefty prison sentence.

"We are in favor of protecting the prophet's honor, but the demand which they are seeking could have portrayed Pakistan as a radical nation worldwide," Interior Minister Sheikh Rashid Ahmed told reporters on Wednesday.

The hashtag "#FrenchLeavePakistan" was trending with over 42,000 tweets on Thursday, on Twitter.

Anti-French sentiment has been brewing for several months in Pakistan, since the government of President Emmanuel Macron offered support for a magazine, Charlie Hebdo, to republish cartoons of the Prophet Muhammad, a move deemed blasphemous by many Muslims.

Macron's comments in September sparked widespread anger, with tens of thousands in Pakistan, Iran and other Muslim countries taking to the streets to organize French boycotts.

In an address to the United Nations, Pakistani Prime Minister Imran Khan slammed the magazine for republishing the cartoons, saying "willful provocations" should be universally outlawed."