The move to outlaw the group comes after two police officers were killed in violent protests. Previously, the TLP's leader gave the government an ultimatum to expel the French ambassador. 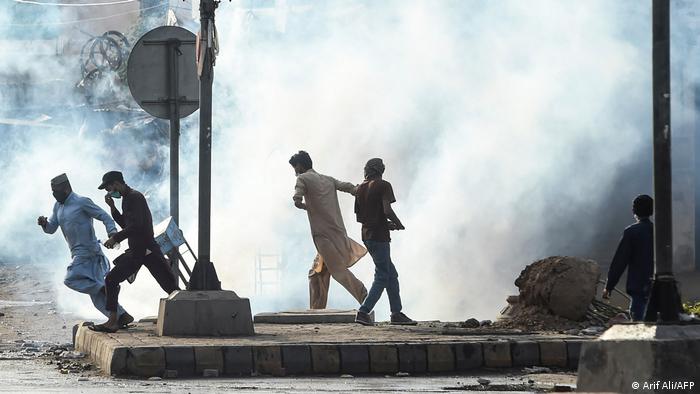 Pakistan has moved to ban a hard-line party after two police officers were killed in protests following the arrest of the group's leader, Interior Minister Sheikh Rashid said on Wednesday.

The Tehreek-i-Labaik Pakistan (TLP) party, which has widely denounced perceived acts of blasphemy against Islam, has organized three days of protests in which more than 100 police officers have been injured. The group opposes the publication of cartoons depicting the Prophet Muhammad in France, and also the French response reaffirming the right to "blasphemy" after schoolteacher Samuel Paty was beheaded last October.

The TLP has demanded that the government expel the French ambassador and endorse a boycott of French products.

On Wednesday, Pakistani security forces fired tear gas and used batons to clear sit-ins staged by supporters two days after the arrest of Saad Rizvi, the head of the TLP.

Two police officers and three others have been killed in the clashes, which started on Monday after police arrested Rizvi for threatening protests if the government did not expel the French ambassador for the cartoons of Prophet Muhammad.

Last week, Rizvi issued a statement asking the government of Prime Minister Imran Khan to honor what he said was a commitment made in February to expel the French envoy before April 20. However, the government has said it only committed to discussing the matter in Parliament.

The TLP is known for initiating massive street protests in Pakistan in response to any change in the country's blasphemy law. The party was formed in August 2015 and has been the target of government regulation before. In 2018, police arrested several TLP members, and shut down social media accounts and websites affiliated with the party.