Lawmakers will vote on a motion of no-confidence against Prime Minister Imran Khan. Opposition legislators say they have enough votes to push it through. 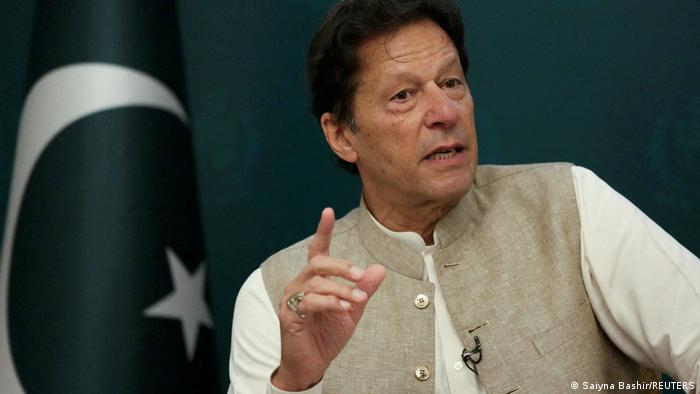 Khan is facing his toughest political challenge to date

Pakistan's parliament is set to vote on a motion of no-confidence in Prime Minister Imran Khan after it was put forward by opposition lawmakers on Monday.

Opposition leader Shahbaz Sharif said Khan "has lost the confidence of this house" during a reading from the motion.

Debates will begin on Thursday, and the vote will be held within seven days, possibly leading to the removal of the prime minister from power.

Those pushing for Khan's removal say they have the 172 votes necessary in the 342-seat lower house after wooing his coalition partners.

What are Khan's chances of surviving the vote?

The key opposition Pakistan People's Party (PPP) joined with others to push the vote, which sparked chaos when it was announced a few weeks ago.

Khan's party, Pakistan Tehreek-e-Insaf (PTI), holds 155 seats in the lower house and so is reliant on coalition allies. He was voted into power in 2018 with 176 votes. A majority of 172 could now unseat him.

Khan has vowed to defeat the motion and attended a rally on Sunday to drum up support.

Members of the PTI have reportedly abandoned him, and his coalition is under strain.

"We have the support of required lawmakers to oust Imran Khan's government," the PPP leader said.

Why is there a vote of no-confidence against the prime minister?

Khan, the 69-year-old former captain of Pakistan's cricket team, said a foreign-funded conspiracy was behind the attempt to oust him.

Analysts have suggested that he has fallen out with the country's powerful military, something both he and the military deny.

The prime minister's increasingly anti-Western rhetoric and his recent trip to Moscow following Russia's invasion of Ukraine may have some elites worried about how this direction could affect the country's economy and security.

Accusations of corruption have also plagued the government as soaring inflation and unemployment are souring public sentiment.

Both Khan and the opposition have rallied thousands of their respective supporters to pressure the other side.