Pakistan: PM Khan faces tough challenge in no-confidence vote | Asia | An in-depth look at news from across the continent | DW | 17.03.2022 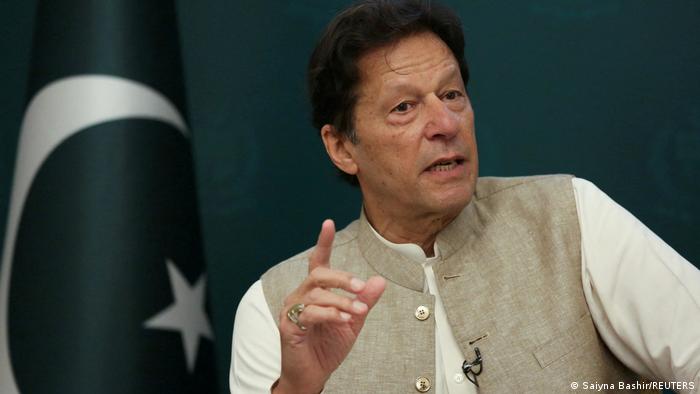 Pakistani Prime Minister Imran Khan, who came to power in 2018, is facing the toughest challenge of his political career as opposition parties have joined forces to oust him through a vote of no confidence in parliament.

Many lawmakers of the ruling Pakistan Tehreek-e-Insaf (PTI) party have reportedly deserted him, and cracks have also started emerging in the ruling coalition amid corruption allegations against the government. Inflation is at a record high and unemployment is rising in the Muslim-majority country.

The opposition alliance needs a simple majority of 172 lawmakers in the South Asian country's 342-strong National Assembly, the lower house of parliament.

"We have more than 172 votes [in the National Assembly]. The government is in for a surprise on the day of voting," Shahid Khaqan Abbasi, a former premier and senior official of the Pakistan Muslim League (Nawaz) party, told DW.

Khan's party has 155 lawmakers in the lower house of parliament and it relies on the support from coalition parties to stay in power.

"The prime minister is in 100 percent danger," Pervaiz Elahi, a powerful politician in the ruling coalition, told a local news channel on Tuesday.

Can the opposition succeed?

The government says it is confident that the opposition parties will not be able to oust Khan.

"They won't be able to get a simple majority in parliament. PM Khan will complete his five-year term," Information Minister Fawad Chaudhry told DW.

No prime minister in Pakistan has ever been removed from office through a vote of no confidence.

However, Michael Kugelman, a South Asia expert at the Washington-based Woodrow Wilson Center for Scholars, believes that Khan "is obviously feeling the heat in ways he hasn't at any other time in the past three-and-a-half years."

"It will come down ultimately to whether the opposition can get enough votes, including a few yes votes from legislators inside the ruling coalition, and if the military is still behind Khan," he told DW.

The country's powerful military says it is completely "neutral" in the current political crisis.

Many analysts agree with the military's neutrality claim, despite the fact that the generals were accused of brining Khan into power in 2018. The military denies these allegations.

Khan has taken a defiant posture since the opposition sought the no-confidence motion. He has been holding mass rallies across the country, and has threatened opposition leaders with dire consequences.

The ruling party says it will hold a "one-million-people" demonstration in Islamabad ahead of the vote. Opposition leaders say it shows that Khan has lost majority in parliament and is now trying to evade the parliament vote.

On Monday, Information Minister Chaudhry warned his party lawmakers against backing the no-confidence motion, saying they will have to wade through the crowd of tens of thousands of people to enter parliament to cast their vote.

The opposition, too, will hold a rally in Islamabad to increase pressure on the government.

"As per the country's constitution, no one is allowed to interfere in the voting process, and if the government tries to stop our people [lawmakers], we will teach them a lesson," warned former PM Abbasi.

Benazir Shah, a political analyst, says the government and opposition holding huge rallies at the same time could result in violent clashes among their supporters.

"There is a risk of clashes. I hope the situation will not escalate," she told DW.

Has Khan lost support from generals?

The military, which has ruled Pakistan for over three decades collectively since it became an independent country in 1947, says it doesn't want to be dragged into the current political turmoil.

"The military has nothing to do with politics; it's better to avoid unnecessary speculation on this matter," Major General Babar Iftikhar, director general of the Pakistan Army's public relations wing, told media last week.

But Chaudhry insists that the military is obliged to "stand with the government according to the constitution."

"The military, not surprisingly, hasn't been transparent about its views on Khan right now," analyst Kugelman noted. "Civil-military relations have generally been good in the current hybrid system, but that doesn't mean the political winds can't shift direction," he added.

"Khan sparred with the army over the process to replace the Inter-Services Intelligence (ISI) director, as the previous director was close to him. But I'd bet on Khan's fate hinging more on the calculations of parliamentarians than on the position of the military," Kugelman thinks.

The premier, who visited Moscow and held talks with Russian President Vladimir Putin last month, has increasingly taken an anti-West stance in the past few weeks. He has also criticized the European Union in public rallies.

Analysts say the military is aware of the changing geopolitical and international relations, especially in the aftermath of Russia's invasion of Ukraine. Khan's anti-US and anti-EU sloganeering and possible violent clashes domestically could have a serious impact on the country's economy and security. There are red lines for the military in this regard.