Pakistan has released 220 Indian fishermen detained for crossing into its territorial waters. Ties between the two countries have been tense over the Kashmir conflict. Activists say India should reciprocate the gesture. 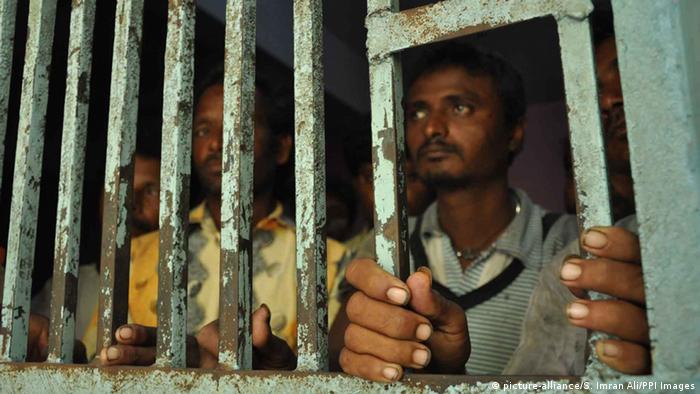 The same number of Indian fishermen remain in Pakistani custody; however, Pakistan's Dunya TV said the second batch of fishermen could be released on January 5, 2017.

The released fishermen are expected to be handed over to Indian authorities at the eastern Wagah border on Monday, according to the local media.

Indian and Pakistani fishermen are often held for illegal fishing since the Arabian Sea border is not clearly demarcated. Many of these inadvertently cross over into the other country's territory due to the lack of navigation systems in their boats.

The captured fishermen then usually spend years in jail without access to legal support. Poor diplomatic ties between the two South Asian rivals mean that not only are the bureaucratic requirements for the release of these fishermen not fulfilled, some of them are even perceived as the "enemy" country's spies.

A spokesperson for the Pakistan-India Peoples Forum for Peace and Democracy (PIPFPD), an NGO striving for friendly relations between India and Pakistan, said that now New Delhi should reciprocate the Pakistani gesture and release Pakistani fishermen held in Indian prisons.

Relations between India and Pakistan have been tense since the killing of Burhan Wani, a separatist leader in India-administered Kashmir, in July. While New Delhi accuses Islamabad of backing an armed insurgency in its part of Kashmir, Islamabad says its support to the Kashmiri separatists is only "moral" and "political."

Both nuclear-armed South Asian neighbors claim the Himalayan region in full but rule parts of the valley.