At least 13 people, including nine Chinese construction workers with a hydropower project, were killed in the blast in a remote region of northern Pakistan. 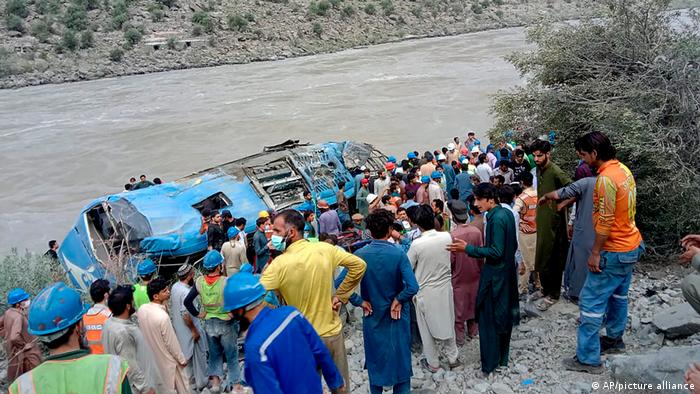 The bus fell into a ravine after the blast

Nine Chinese nationals, two Pakistani soldiers and two locals were killed in an explosion that destroyed a bus on Wednesday in Pakistan.

The Chinese Embassy in Pakistan said in a statement that "a certain project of a Chinese firm in Pakistan suffered an attack, which caused the deaths of Chinese nationals."

The Pakistani Foreign Ministry said in a statement the blast was caused by mechanical failure resulting from a "leakage of gas," not a militant attack. China maintained the incident was a bomb attack.

He called on Pakistan to "severely punish" the attackers.

China's Foreign Ministry said it asked Pakistan to probe the incident and to "earnestly" protect the safety of Chinese personnel, institutions and projects.

No group has claimed responsibility for an attack, but Islamist militants linked to the Pakistani Taliban had previously targeted Chinese interests in Pakistan.

What are China's projects in Pakistan?

The security of Chinese workers has long been an issue of concern in Pakistan. Engineers and construction workers from China are helping the country build a dam in Kohistan.

Chinese and Pakistani construction workers, engineers, surveyors and mechanical staff were on their way to the site when the incident occurred.

The hydroelectric project is part of the $62 billion (€53 billion) China-Pakistan Economic Corridor (CPEC) plan, a series of infrastructure projects in Pakistan funded by China.