Pakistani leaders have expressed their support to the people of Kashmir, calling for the right to self-determination under a UN Resolution. 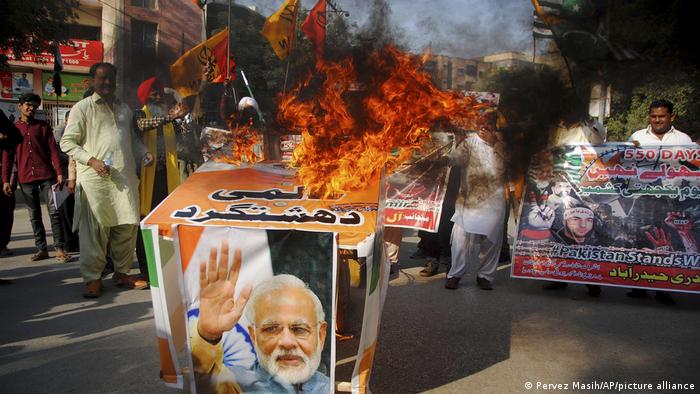 Pakistani leadership on Friday marked the annual "Day of Solidarity with Kashmir" with anti-India rallies in Muzaffarabad, the capital of the Pakistan-claimed Kashmir, local media reported.

The disputed region, Jammu and Kashmir, has been divided between Pakistan and India since their independence in 1947. The two nuclear powers claim the region in its entirety.

What did the protesters demand?

The protests called for Kashmir’s right to self-determination under a 1948 UN Resolution, which called for a referendum for the people to choose between India or Pakistan.

Khan said that Pakistan supported the people of Kashmir in their fight for "legitimate rights," adding that it was India’s responsibility to provide an "enabling environment" for peace.

"God willing, Pakistan will give the right to Kashmiri people to decide whether they want to remain independent or become part of Pakistan," Khan said at a rally in the Pakistan-administered town of Kotli.

The former cricket player also expressed willingness to resume talks with India, on the condition that New Delhi restores special status to the Indian-administered parts of Kashmir.

"Our desire for peace and stability should not be misunderstood or considered a sign of our weakness," added Khan.

According to a UN Security Council resolution in 1948, a plebiscite was to be offered to the people of Kashmir, giving them a choice to join either India or Pakistan. The referendum never happened. India has rejected the offer to hold a plebiscite till Pakistan withdraws its troops from the Kashmir region.

What is the conflict about?

India and Pakistan have fought two wars over Jammu and Kashmir.

Before the two countries' independence from Britain, the Muslim-majority Kashmir was ruled by a Hindu leader, Hari Singh.

Singh sought India’s protection when the Islamic Republic of Pakistan tried to seize control over the region, marking the first war over Kashmir.

As India tried to make a name for itself as a secular nation, its control over the Muslim-majority state was crucial for its diversity and coexistence.

The war, which ended in 1949, divided the state along the unofficial border "Line of Control" (LoC).

What is the current situation in Kashmir?

India revoked Kashmir's semi-autonomous status in August 2019. The clampdown was followed by a suspension of high-speed internet services in most of the region. On Friday, however, officials in Indian-administrated Kashmir said they would restore high-speed internet.

Since 1989, India has deployed hundreds of thousands of soldiers to fight rebel groups in the region.

India has long accused Pakistan of arming militias in Kashmir, although the Islamic Republic insisted it only provided diplomatic support.

Separatists have turned the region into a scene of low-level insurgency, pressing for further access to local resources.

Tens of thousands of people have been killed in the conflict over the years.

The Associated Press contributed to this report