Pakistan has accused the United States of violating its sovereignty by using a drone strike against Afghan Taliban leader Mullah Akhtar Mansour. 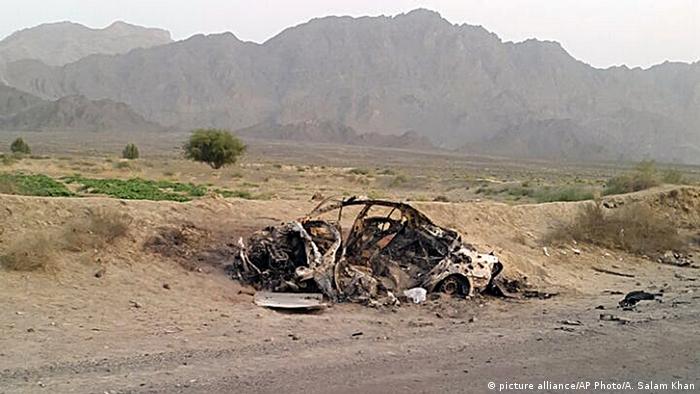 The attack near the Pakistani-Afghan border marked the most significant US incursion on Pakistani soil since the 2011 raid that killed Osama bin Laden.

"This is a violation of Pakistan's sovereignty," Prime Minister Nawaz Sharif told the press while on a visit to London on Sunday.

Despite Sharif's ire, it highlighted how far Washington has been willing to go in its fight with the Taliban. US officials said the drone strike had been authorized by President Barack Obama.

An anonymous US official told the Reuters news agency that Washington had only notified Pakistan after Saturday's drone strike. The government in Kabul has repeatedly accused Pakistan of sheltering insurgents.

It was unclear how long Mansour had been in Pakistan prior to his alleged death, but he is also believed to have traveled to Iran.

Pakistan's Foreign Ministry said they had discovered a passport at the site of the strike which carried a valid Iranian visa. While the passport bore a different name, the picture was reported to resemble older photos of the Taliban leader.

The death of Mansour was confirmed by the US on Monday.

"He is an individual who, as head of the Taliban, was specifically targeting US personnel and troops inside of Afghanistan," US President Barack Obama told reporters in Vietnam, where he kicked off the first leg of his Asian tour.

Afghanistan authorities have already warned that Mansour's possible successor, Sirajuddin Haqqani, could prove to be an even more unrelenting foe. As a longtime warlord and head of the powerful Haqqani clan, he is considered the most likely choice to assume power.

Afghan President Ashraf Ghani has expressed hope that the removal of Mansour from power could re-open the door to peace talks between the Taliban and the government. After founder Mullah Mohammad Omar was confirmed dead last summer and Mansour took his place, the Taliban cut off all negotiations with Kabul.

The Afghan government and intelligence agency have both confirmed the death of Taliban commander Mullah Akhtar Mansour. The senior Taliban figure was reportedly killed during a US drone strike in Pakistan. (22.05.2016)

The Pentagon has announced that Afghan Taliban leader Mullah Akhtar Mansour has probably been killed in a drone strike in Pakistan. The raid was specifically targeting the fundamentalist leader, US authorities said. (21.05.2016)