Over 1,000 years old, drought resistant and unique - miracle plants in the Namib desert

Surviving under harsh conditions is one thing. Growing for 1,500 years, building dunes and producing melons is quite another. Meet two plants that have perfected life in the desert. 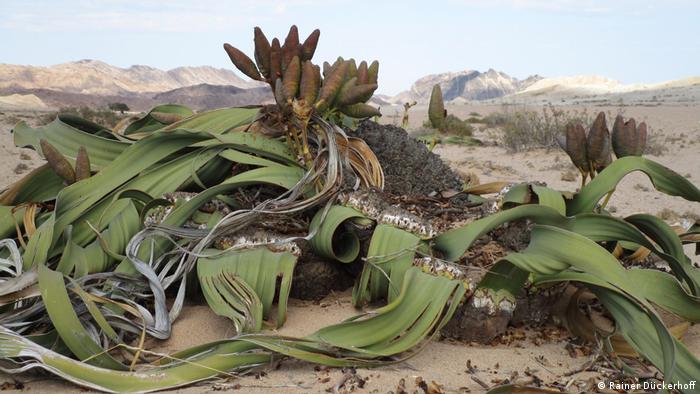 Even marketers are leveraging the power of the fascinating welwitschia plant.

"It outlasts and it survives … it blooms where others falter and shows growth over time," reads a billboard at Windhoek airport in Namibia, promoting an asset managing company.

The desert plant Welwitschia mirabilis is indeed an extraordinary plant, mastering life in the hot, dry desert where other plants can't survive.

It only grows in the Namib desert within Namibia and Southern Angola. It's also the national plant of Namibia.

Even the Namibian national rugby union team is named after it.

Its full Latin name shows that the researchers who discovered the plant were amazed by it as well: "Mirabilis" is the Latin word for "marvelous."

Nowadays, it's referred to as a "living fossil."

At first sight welwitschia plants might not appear quite impressive, particularly when they're still small.

They grow close to the ground and, apart from the pale green leaves, they look almost… dead. 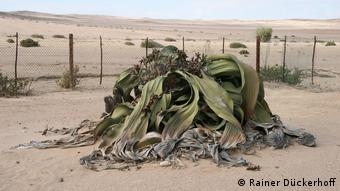 This giant, 1,500-year-old welwitschia is a tourist attraction

The older, larger specimens, particularly the giant welwitschia, are impressive to the point of becoming a tourist attraction.

There's one growing 50 kilometers (31 miles) east of the Namibian town of Swakopmund on the Atlantic coast - and it's as tall as a human being, estimated at roughly 1,500 years old.

A fence keeps people - and their feet - from trampling its sensitive root system growing close to the ground.

"Fog kept the plant going for so many years," says Titus Shuuya, a welwitschia researcher at the Gobabeb training and research station in the Namib Desert. "Welwitschia's fine root hairs can capture the moisture." 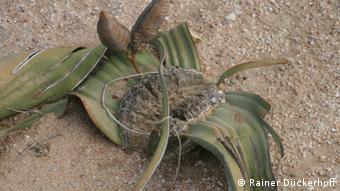 Welwitschia has just two leaves, which continue growing for as long as the plant lives. Titus Shuuya discovered that they grow an average 0.37 mm per day.

"When environmental conditions aren't favorable, growth decreases, so that it doesn't use a lot of energy," she says.

The plant's patience - just sitting and waiting for better conditions - makes it so persevering and lasting.

"These plants can teach us a lesson," Shuuya says.

Making its own shade

Even 1,500-year-old welwitschia plants have just two leaves. They're not easy to see, though, as the leaves grow very long and split multiple times at their ends.

Those long leaves wrap around the bottom portion of the plant.

"They give shade to the root hairs, and thus protect the plant from losing water," Shuuya explains. 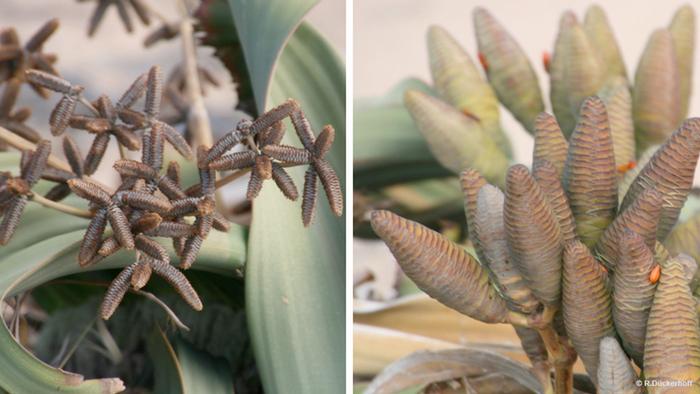 Welwitschia plants have a gender: Male plant on the left, female on the right

Welwitschia can also adjust the color of its leaves. When it's very hot, the leaves produce more red pigments, which protect the plant from the sun's radiation. When temperatures drop and water is more readily available, the leaves form more chlorophyll, the green pigment, to conduct photosynthesis.

"These [color] changes are visible," says Monja Gerber, adding that the photosynthesis rate is also generally higher toward the bottom of the leaves, which are turned away from the sun.

Building its own sand dunes 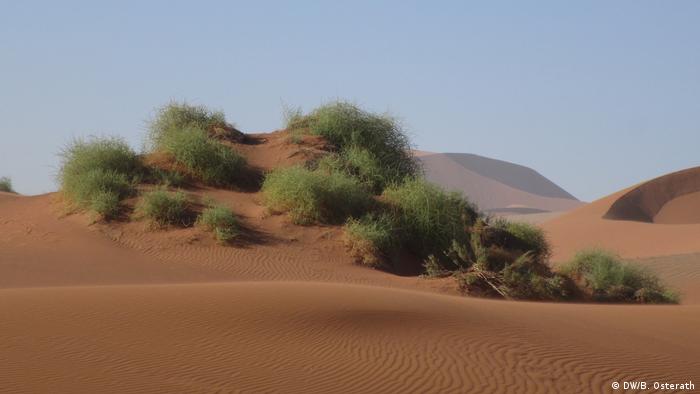 A sand dune, constructed by the nara plant atop it

Not as famous as welwitschia, but biologically impressive nevertheless, is the nara plant (Acanthosicyos horridus).

It is a leafless, spiky thicket that grows only in the Namib Desert. By forgoing leaves, it prevents water loss. Instead, it conducts its photosynthesis directly through its green stems and spines.

The plant also absorbs moisture from fog directly through its stems.

"The more time I spend with it, the more it reminds me of an intelligent plant," says Monja Gerber, who's doing her master's thesis on the nara. "It can actually manipulate its environment to better suit itself." 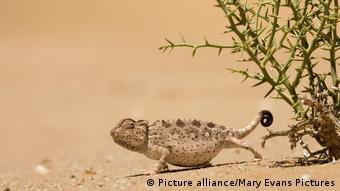 Nara plants grow on top of sand dunes in the middle of the desert. The special thing about that, though, is that the sand dunes weren't there previously. The plant constructed them.

This is how it works: Nara plants growing on the ground accumulate sand around them, blown in by the wind. The lower part of the plant, which is covered in sand, dies off and provides nutrients for the rest of the plant. New plant parts then grow on top of the old one. The nara plant gradually gains height as a result, accumulating even more sand.

In this manner, the plants grow up to 3 meters high.

'A melon in the desert is not normal'

What really makes the nara so special, though, is its fruit.

As Monja Gerber puts it: "A melon in the desert is not normal."

The fruits are not only a water-rich food source for animals around, but also for humans. 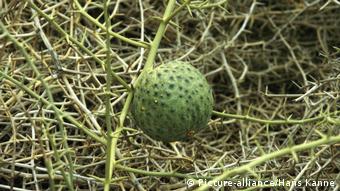 The Topnaar people - an ethnic group native to Namibia that lives in the Namib Desert - harvest those melons seasonally.

They eat the flesh but also sell the seeds, which can be used to produce cosmetic products due to their high omega oil content.

"The Topnaar people depend on the nara plant as a source of income to sustain their livelihood," Monja says.

She's part of a project team that's trying to cultivate the nara on a larger scale to help the struggling Topnaar communities.

Nara cultivation isn't possible - yet. As soon as you try to establish a germinated nara seedling, it just dies off. Nobody knows why, Monja says.

Maybe the plant just wants to decide on its own where it wants to grow.

In any case, desert plants like the welwitschia and nara are highly adjusted to their environment.

They only grow in certain parts of the Namib desert - and that's it.

Hardly anybody will ever see a black-footed cat. They are only about half the size of domestic cats and live in the savannah of southern Africa. German zoologists are trying to find out how many of them are still there. (08.08.2016)

From the bone-dry Atacama Desert to a really rainy village in India, from the highest peaks to the darkest depths - our Earth is an amazing place. Check out some of nature's most extreme spots! (15.05.2015)

Fertile soil is disappearing, swathes of land are being eroded away. Through its convention on combating desertification the UN is attempting to hold back these developments. (31.07.2015)