Is this tree really full of goats? It may look like it's been edited, but this scene is quite common in southern Morocco. But left unchecked, overgrazing on these precious argan trees is bad news for the ecosystem. 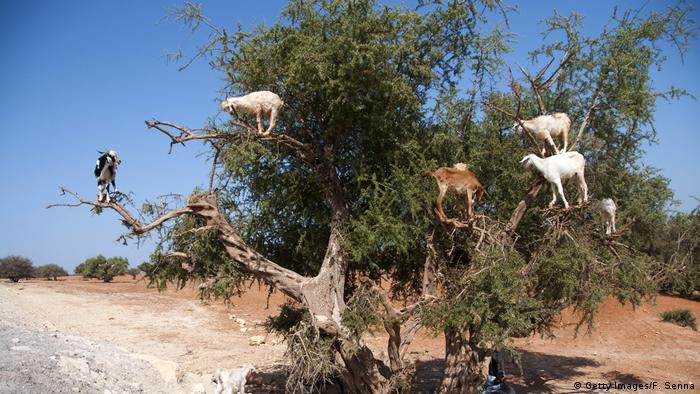 Looking like goat-shaped baubles decking out a tree, what's driving this seemingly odd sight is the creature's immense craving for a tasty snack.

Their passion for the argan fruit has meant goats have learnt to climb as high as 8 to 10 meters (26 to 32.9 feet) up into the branches to reach it.

Local farmers have also encouraged the goats' craving, owing to the animals' rather lucrative poop. The seeds are indigestible, so once the goat has done the tricky work of eating the fruit from the high branches, the goat herders collect some of the seeds from the excrement, for processing into oil.

Read more: The sweet taste of a Brazilian super berry

Argan oil is a valuable export for Morocco. It's sold in wealthier countries as pricey cosmetics and food. The oil generates more than $6.5 million (€5.7 million) per year for Morocco's economy. 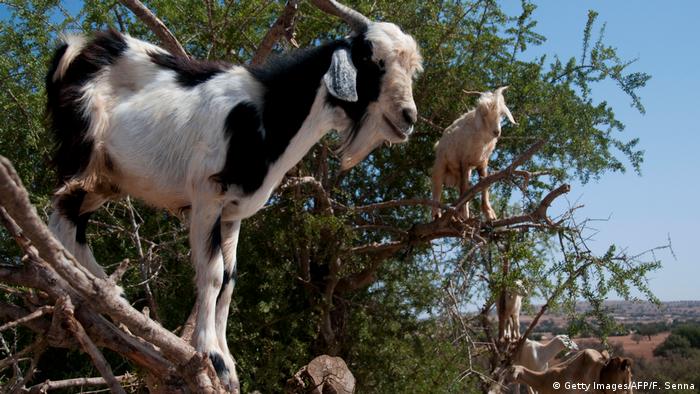 While nimble, the climbing goats do occasionally take a tumble

Although goats are already known for their nimbleness, climbing trees poses a challenge. They manage it by climbing slowly, and some goat herders try to make it easier for them by cutting some branches off the trees so the creatures can start climbing more easily. But the goats do still occasionally take a tumble.

And contrary to the popular idea that the seeds all come from the goats' excrement, scientists have found that most of the seeds used to produce Morocco's argan oil actually comes from those regurgitated and spat out by the goats.

This habit of spitting out the seeds also plays a key role in maintaining argan forests. Argan seeds actually mostly come from what the goat spits out, not its excrement

Researchers from the Donana Biological Station in Seville, Spain, found that 70 percent of seeds regurgitated by goats could still grow, meaning the creatures play an important ecological role in helping the species to survive.

Argan trees play an important ecological role thanks to their deep roots, protecting the local environment from desertification.

But the rise in argan oil's popularity, coupled with climate change, has left the trees struggling to survive.

Overgrazing by goats and deforestation has caused the number of argan trees to plummet. They once covered the whole region of North Africa.

That, coupled with the high demand for argan oil, has prompted organizations to implement a number of conservation measures to make sure tree numbers don't further dwindle.

Local people are also playing an important role in helping to protect argan trees, such as implementing seasonal bans to protect the trees from goat grazing.

For Morocco's argan trees, climbing goats are both a help and a hindrance.

Agriculture in Morocco: Insurance against losses through climate change