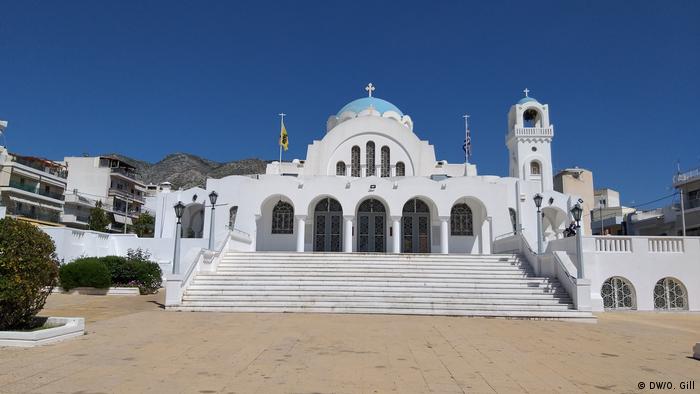 Some leaders have been more cautious, but all churches were open on Epiphany

On Wednesday, the Holy Synod of the Greek Orthodox Church filed a complaint with the National Council for Radio and Television accusing three TV stations of "sullying religion." The broadcasters had criticized Orthodox clergy for rebelling against government measures to slow the spread of the coronavirus during the celebration of Epiphany on January 6. The church — which wields exceptional power, though Greece is officially a secular state — is not usually criticized in the broadcast media. In an attempt to turn the tables, the church's top leaders appear to be trying to change the topic of the conversation to whether the broadcasters committed "blasphemy."

On January 6, Greek Orthodox Churches were opened to worshippers, despite the government's official ban on such gatherings. "We showed disobedience," said Metropolitan Athenagoras, the spokesperson of the Holy Synod, "and the government showed tolerance."

Bishops remain divided as to how far they should take that disobedience. On Epiphany, for example, most churches adhered to at least some measures to slow the transmission of the coronavirus. Some, however, deliberately ignored protections because, as clergy have said, faith would protect worshippers from being infected during Mass. As a result, worshippers took their Holy Communion from the same spoon and all of them kissed the priest's hand.

Because the second wave of the coronavirus has proved much more lethal in Greece than the first had, there is dispute within the church about how to properly administer religious services during the pandemic. "Modernists" are pitted against "Traditionalists," "Rationalists" against "Visionaries." Concurrent to the debates about to pandemic is the power struggle over who will succeed Archbishop Hieronymos — who is old and frail and in November was hospitalized with COVID-19.

Officials have sought to find a way to carry on ancient religious rituals and offer moral support while also protecting the health of worshippers. But there are others who seek to push on as the church has always conducted itself. "God's laws overrule human laws," Metropolitan Mektarios of Korfu has repeatedly said.

On January 6, a priest in Kalamata interrupted a service because some of the participants refused to wear masks. "Play objector in your home — not here," he said. "Those who do not wear a mask should leave. Respect your fellow human beings and the law." The scene, which was filmed, went viral on social media platforms. Most online commentators seemed to agree with the priest's approach.

Metropolitan Seraphim of Kythira, on the other hand, has spread a conspiracy theory. "Vaccines are a product of abortions," he said recently. "This product that comes from killed embryos will be injected into our bodies. ... They want to create a 'metahuman,' a mutated man, a man who will be like a robot."

Seraphim does not call the shots in the Greek Orthodox Church. In a declaration this week, the Holy Synod deferred to science and announced that the vaccines being used in Greece did not require the use of embryonic cell cultures for their production.

"The Holy Synod reiterates that the choice of vaccination is not a theological or ecclesiastical issue," the church announced in a formal statement. "It is mainly a medical-scientific issue, as well as a free personal choice of each person in communication with his doctor, and does not constitute a fall from the right faith and life."

In December, Metropolitan Hierotheos of Nafpaktos and Agios Vlasios became one of the first people to receive one of the vaccines in Greece. The occasion was filmed, and he said people would enjoy higher life expectancy thanks to the vaccine.

Overall, most Greek Orthodox bishops seem to be aware of the risks posed by the pandemic. They have been meeting online and trying to protect themselves — not least because there have been many cases of COVID-19 among clerics, some of which have proved fatal.

Sex and relationships during the pandemic

Sex and relationships during the COVID-19 pandemic