A Sumatran orang-utan known as Nieas has been shot dead by zookeepers in the western German city of Duisburg. The 26-year-old ape made a break for freedom after its door was not properly locked. 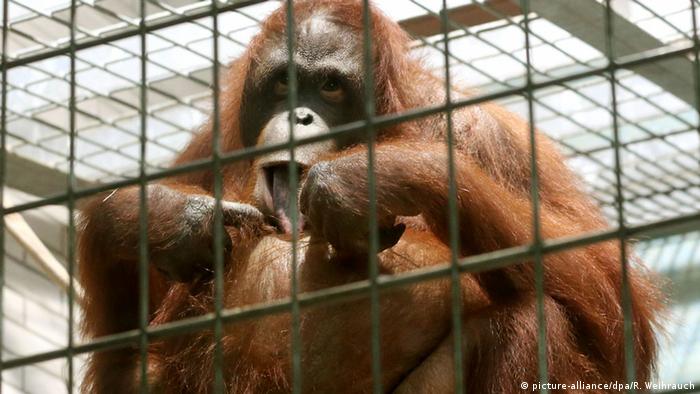 According to a statement released by the zoo on Tuesday, Nieas became agitated when he was confronted by a second male orang-utan after escaping from his paddock on Monday night.

In his moment of panic, the primate, who weighed more than 100 kilograms, reportedly began swinging from an overhead lamp, from where he could have jumped the fence and escaped onto the nearby highway.

Duisburg Zoo said using tranquilizer darts instead of live ammunition was not viable, because "it would have taken several minutes for the sedative to take effect."

"By this time the ape would already have been in city traffic, and we couldn't have ruled out injury to members of the public," the zoo added.

Keepers successfully sedated the second orang-utan, Bayu, before he was able to escape.

"Nieas came to us as a little bundle and was definitely part of our family," said zoo director Achim Winken, adding that no professional action would be taken against the employee responsible for the fatal shot.

"The consequence is that he's shocked and will remain so until the end of his life," Winken said.

"In general, there are questions about whether it's even possible to keep primates like great apes properly in zoos," said Marius Tuente, spokesman for the German Animal Rights Society.

"It's no longer ethically defensible to use our near relatives for the purposes of keeping them on display."

Tigers rescued from the circus and poor conditions have been provided with a new home in southwestern Germany. Animal protection associations have called for the government to pass legislation on keeping such animals. (05.08.2015)

Scientists have discovered what caused Berlin's beloved polar bear Knut to drown in his enclosure. The cub was the star of the zoo during his brief life from 2006 to 2011. (27.08.2015)

The US Smithsonian National Zoo in Washington has announced the arrival of rare giant panda cubs. Panda mother Mei Xing and her unnamed cubs are said to be doing well. (23.08.2015)