Optimism as Serbia and Kosovo seek to mend differences

A spirit of optimism has emerged in EU-brokered talks between Serbia and Kosovo. As prospective fellow EU member states, the two have been trying to iron out differences so they can normalize relations. 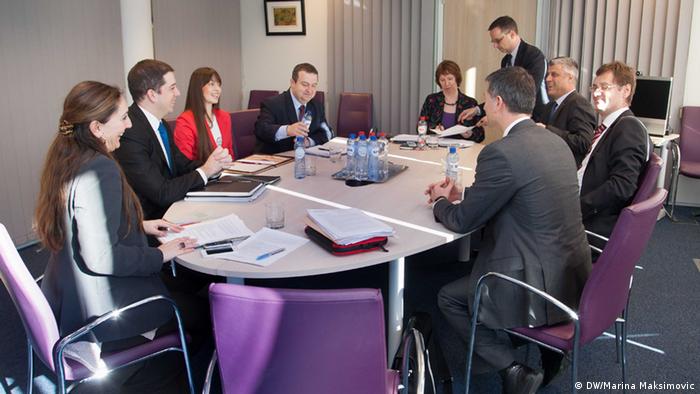 Serbia and Kosovo have made significant strides in resolving their differences in talks between the premiers of both countries, EU foreign policy chief Catherine Ashton said on Wednesday.

"It is my personal view that we are very close to a solution on some of the most difficult issues," Ashton said.

The premiers were meeting to try to resolve their differences, under pressure to reach a deal or jeopardize their chances of becoming members of the European Union.

Wednesday's talks had been "extremely difficult," said Serbian Prime Minister Ivica Dacic, given that they touched on the "biggest, most relevant issues that have been torturing, tormenting us for the past decades - and I even dare to say for the last centuries."

‘A century of enmity and confrontation'

Kosovar Prime Minister Hashim Thaci said he could not confirm whether the sides were nearing a solution, but added that talks were moving in the right direction. "We hope to find some solution in the days to come," Thaci said. "Kosovo is very much committed to reaching an agreement. As two peoples and two countries we have lost a lot of time, in terms of spending a whole century in enmity and confrontation."

Earlier in the day, UN Secretary General Ban Ki-Moon said he was "encouraged by the commitment and determination" of both parties to settle their differences."

Thaci and Dacic have held six rounds of talks brokered by the EU since October. The two countries fought a war in the late 1990s, which effectively ended with an ethnic partition in Kosovo, between Albanians in the south and Serbians in the north.

The main sticking point appears to have been the degree of autonomy that Pristina might afford to the Serbian-dominated municipalities in the north. A Serb minority of some 40,000 people refuses to acknowledge Kosovar authority there.

Kosovo declared independence from Serbia in 2008, but Belgrade has been steadfast in its refusal to recognize it as a sovereign state. Conclusive discussions are set to take place on April 2.