Poland's liberal Civic Platform scored a landslide victory in parliamentary elections amid record turnout at the polls, ending the reign of the right-wing Law and Justice Party of Prime Minister Jaroslaw Kaczynski. 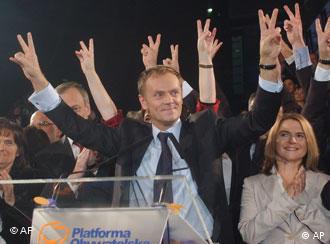 Victory for Tusk this time around

The Civic Platform, or PO, party was led by Europe-friendly opposition leader Donald Tusk. In a victory speech on Sunday, Oct. 21, Tusk thanked voters "who showed all of Europe that in times of difficulty Poles can take care of their country in an extraordinarily responsible fashion."

"We'll do everything to make Poland a good home for you," he vowed, ending the emotional address by singing the Polish national anthem along with hundreds of PO party faithful gathered at a victory rally in Warsaw. 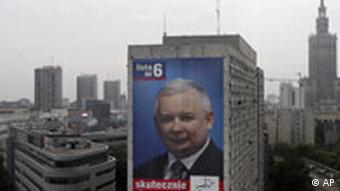 In the wake of the crushing defeat for Law and Justice, or PiS, Prime Minister Kaczynski said: "I wish Tusk success. I congratulate him."

He vowed that PiS would be a "hard and decisive opposition," apparently ruling out any coalition with the archrival liberals. Meanwhile, the PO is expected to team up with the Peasants' Party to form an outright majority.

Based on early counts of some three-quarters of the votes, Poland's election commission said the business-friendly PO took around 41 percent of the vote, which would give it around 205 of 460 parliamentary seats. That would put it well past the PiS, which took 32 percent of the vote, according to early voter surveys.

Turnout soared to around 55 percent, the highest result since Poland's first fully democratic parliamentary election in 1991. As a result, some election stations ran out of ballots, and others had to extend voting hours to accommodate the unexpectedly large numbers of voters.

The interest stood in stark contrast to the record low 40-percent turnout in Poland's last parliamentary ballot in September 2005, which handed Kaczynski's PiS a narrow 2.9-percent victory over the liberals 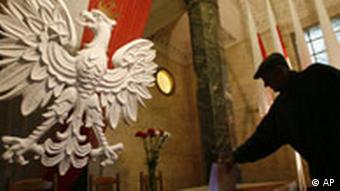 Poles turned out in force to cast their ballots

Sunday's snap ballot came two years early due to the failure of Kaczynski's minority government to forge a stable majority coalition in Poland.

Once confirmed by Poland's State Elections Commission in official results, the PO victory means political power in Poland will cease to be concentrated in the hands of the Kaczynski twins. President Lech Kaczynski's term in office ends in 2009.

With a population of 38 million, Poland was by far the largest of 10 mostly ex-communist states to have joined the European Union in 2004 and has since become a key player in the 27-member bloc.

"It was a battle. We won. But tomorrow we have to get to work," Tusk told his supporters during his victory speech at his party's headquarters.

President Lech Kaczynski made no comment on his twin brother's defeat in parliament, which experts also saw as a vote against the reigning head of state.

The election was closely watched by Polands EU partners, especially Germany, which has seen its relations to Poland strained during the Kaczynski brothers' rule.

An estimated 30 million Poles are eligible to vote Sunday in a snap parliamentary election. The poll is being called the most important since the collapse of communism in 1989. (20.10.2007)

EU leaders clinched a final deal late Thursday, Oct. 18, on a major overhaul of the 27-member bloc after making key concessions to Italy and Poland. The new Lisbon Treaty is now expected to be signed in December. (19.10.2007)

Germany lacks a "vision for the future of Europe," according to a top Polish foreign policy official. He also accused his country's western neighbor of not taking Poland's interests seriously. (04.09.2007)

What do you think of the Polish election results? Send us your comments and please include your full name and country in your reply.