The opposition candidate in Bulgaria is leading the presidential elections, if exit polls are to be believed. Prime Minister Boyko Borisov's candidate came in second. 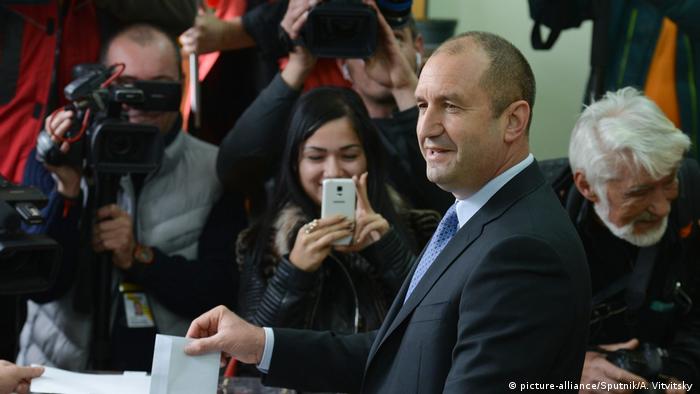 Former MiG pilot and former air force commander Rumen Radev (pictured above) was leading in the presidential election on Sunday, with 24.8 percent to 26.7 percent of the votes polled, surveys by Alpha Research and Gallup international showed.

Prime Minister Bokyo Borisov's candidate Tsetska Tsacheva won 22.5 percent of the votes. If confirmed, it would mean a run-off between Tsacheva and Radev on November 13.

Tsacheva, a 58-year-old lawyer and a member of the ruling GERD party, would become the first female president of the country if she won. If elected, she is expected to continue a pro-European policy for Bulgaria.

Radev, on the other hand, is considered closer to Russia. The 53-year-old recently said Bulgaria had lost much by declaring Russia an enemy. He also called for EU sanctions on Moscow to be lifted, but said "an improvement in relations with Russia doesn't mean a retreat from Euro-Atlantic values."

The president in Bulgaria has a largely ceremonial role. But he or she still chooses top officials and can appoint governments in times of crisis. 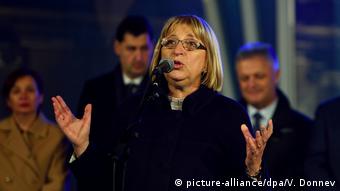 Tsteska Tsacheva is a former lawyer

Sunday's polls were being considered crucial for Prime Minister Boyko Borisov, who has said they were a test for his GERD party. Despite Radev's predicted win, the Bulgarian government said it wouldn't yet resign.

"Let us see the results - we have not lost yet," Borisov said.

The political uncertainty may plunge the eastern European country - plagued by corruption and poverty - into renewed chaos. Prior to the current crisis, the country went through a series of mass protests and elections in the last years.

Prime Minister Borisov seemed to have made the country somewhat stable after reelection in 2014, but experts say his choice of Tsacheva as president was miscalculated.

Bulgaria has also continuously walked a tightrope, balancing its relations with Russia and its status as a member of the European Union and the NATO. The country is hugely dependent on Moscow for gas and the two also have deep historical and cultural ties.

Bulgaria's government has nominated EU Commissioner Kristalina Georgieva as its candidate for UN secretary-general. The Security Council is hoping to agree on a nominee to replace Ban Ki-moon in the next few weeks. (28.09.2016)

Joe Biden lays out foreign policy vision: 'America is back' 5h ago