Following Russia's annexation of Crimea, the Black Sea has become a strategic priority for NATO. Now troops will be stationed there. That is the right move, says DW's Robert Schwartz. 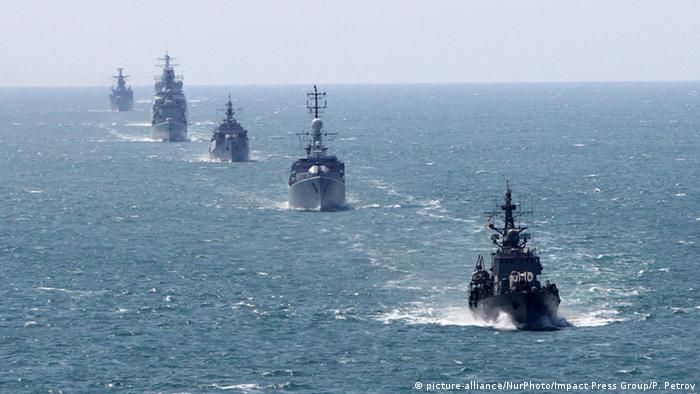 NATO's eastern flank must be more strongly defended. There is a consensus in the military alliance over that point. The war in eastern Ukraine and Russia's threatening posture toward its western neighbors demands strong answers from the West.

NATO is also betting on deterrence and prevention by stationing multinational forces in Poland and the Baltics. This posture will now be expanded to the southeast. Romania's initiative to strengthen the alliance's presence on the Black Sea appears to be bearing fruit. Several member states, including Germany, have agreed to support it.

Change of course at NATO

It became apparent at the last NATO meeting in Warsaw this July that the alliance was a long way from having a common approach to the geostrategic region of southeastern Europe. But even member states on the Black Sea itself - Bulgaria, Romania and Turkey - were not in agreement about what a strengthened NATO presence should look like. Romania has warned for years that the Black Sea was degenerating into a "Russian backwater."

Bucharest saw its old calls for a permanent multinational NATO naval fleet confirmed after Russia annexed Crimea. While Turkey swung between loyalty to the alliance and maintaining relations with Russia, Bulgaria summarily rejected the proposal. Bulgarian Prime Minister Boyko Borisov dreamed of a Black Sea upon which only sailboats, yachts and cruise ships sailed, and would hear nothing of a NATO fleet.

At a meeting of NATO defense ministers at the end of October, a final agreement on a common posture on the southeastern flank was reached. A Romanian-led brigade of up to 5,000 soldiers will now be established there. Several member states have also agreed to cooperate with navy and air force units as well. On paper, there is no such thing as a permanent NATO fleet, but a permanent presence on the Black Sea is now a done deal.

The alliance stands together

That is the right signal for member states on the Alliance's eastern periphery. Their fear of Russian aggression is certainly justified. The region's sense of security has been severely shaken by fighting in Georgia and Ukraine. The West has waited far too long to come up with an adequate response. Now the alliance's wait-and-see attitude has fundamentally changed. Moscow's strategists must now realize that, in an emergency, NATO will stand together to defend all of its partners.

Ultimately, it is up to Russia to show that it is not seeking confrontation with the West. The Black Sea must not become the stage for military provocations. Moscow would be well advised to cease with its saber rattling. Another war in Europe would be a catastrophe for all sides.

NATO secretary general: 'We are not in a Cold War'

As tensions rise between Russia and the West, NATO's Secretary General Jens Stoltenberg told "Conflict Zone" why he believes there is no new Cold War. But does his view match the reality of the situation? (04.11.2016)

Stoltenberg: 'We are in a difficult and challenging security environment in Europe'

Russian NATO ambassador: 'There's no need for Russia to justify its peaceful intentions'

With international condemnation for Russia's bombing campaign in Syria and alleged human rights violations in Crimea, "Conflict Zone" talked to Russia's ambassador to NATO, Alexander Grushko, who rejected the criticism. (26.10.2016)

Germany has confirmed it is sending Leopard 2 tanks to Lithuania as part of NATO plans to reinforce the Baltic states. But the presence is largely symbolic, since Russia is still militarily superior in the region. (27.10.2016)