Opinion: Wolfgang Schäuble is gone, but his austerity stays

German Finance Minister Wolfgang Schäuble, a seasoned stickler, is bidding farewell after eight years. Though anyone in the EU looking forward to a future of more debt may be cheering too soon, writes Bernd Riegert. 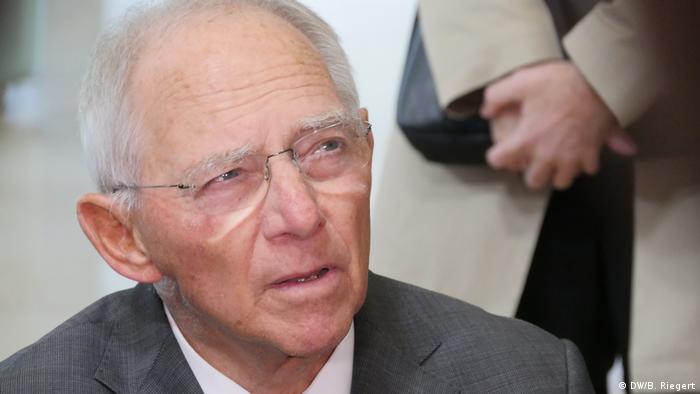 Remember that strict old teacher you had as a kid in school? The one who was always quick to catch your lazy mistakes? What a relief it was when you moved on to the next grade, or he or she finally retired. Looking back, though, you think of that teacher more fondly, valuing all you learned and the life lessons imparted through iron discipline.

Wolfgang Schäuble is that kind of teacher.

Austerity with a goal

For eight years, Germany's outgoing finance minister has instilled financial discipline, debt reduction and compliance in the European Union. He has "annoyed" his colleagues, as he himself admits. However, even Greek leaders now say that Schäuble did the right thing, albeit with some degree of pressure and obstinence. The EU members most in crisis were kept afloat with unprecedented bailouts. They were prodded to enact reforms that they would not have done on their own, and in the end it paid off. Only Greece continues to struggle, with its deep economic crisis, hampered government and strong resistance to necessary financial discipline.

Using an occasional gruff and brash approach, Wolfgang Schäuble has kept the eurozone together. He prevented it from becoming a complete liability. He did not accomplish this on his own – the Netherlands, Finland, the Baltic states, Slovakia, Austria and, for the most part, France and Italy, helped carry the financial rescue forward. Austerity is not Schäuble's invention, but reducing public spending was necessary to avoid collapse.

Perhaps some finance ministers from southern EU states may be breathing a sigh of relief now that Schäuble, at 75, is stepping down and is set to become Bundestag president. However, in retrospect they will see that Schäuble's policy style has also been a great help to many. He was not afraid to take the risk of threatening Greece with expulsion from the EU to bring its chaotic government to attention. It is irrelevant to Schäuble what others think of him and the picture they may paint. He was guided by his own rules and principles.

Schäuble was decisive in the fight against tax havens and was a proponent of a sensible banking union that doesn't lead to communitarization. Until the very end, he has warned that the financial crisis, the debt crisis and the euro crisis are not over, but that we are in the middle of the clean-up phase and cannot ease up now. That is his message. Preventing new debt and balanced finances are his legacy. A state not at risk of collapsing under the weight of its debt is the wisest of economic policy.

What would Schäuble do?

Despite all his accolades, the eurozone's taskmaster is, of course, not irreplaceable. He may be gone, but more important are the policies Germany's new government wants to carry out in Brussels. Even without Schäuble, this will not be the spending spree populists in Italy and Greece sometimes call for. The new finance minister, who will likely be from the liberal Free Democrats (FDP), will maintain Schäuble's course. German taxpayers will accept no less.

The next crisis will present a true test. Schäuble warned of burst bubbles built on speculation and new financial crises. The eurozone will have to tackle the next crisis without him. It may leave some asking: What would Schäuble do?

India evacuates over 200,000 people as Cyclone Tauktae hits 2h ago

US Supreme Court to hear challenge on abortion rights 3h ago