Opinion: US budget has something for everyone but ′Dreamers′ | Americas| North and South American news impacting on Europe | DW | 09.02.2018

Opinion: US budget has something for everyone but 'Dreamers'

It's a positive sign that the US Congress finally managed to pass a budget and end a brief shutdown. But the deal leaves the "Dreamers" hanging once again and shatters the myth that deficits matter, says Michael Knigge. 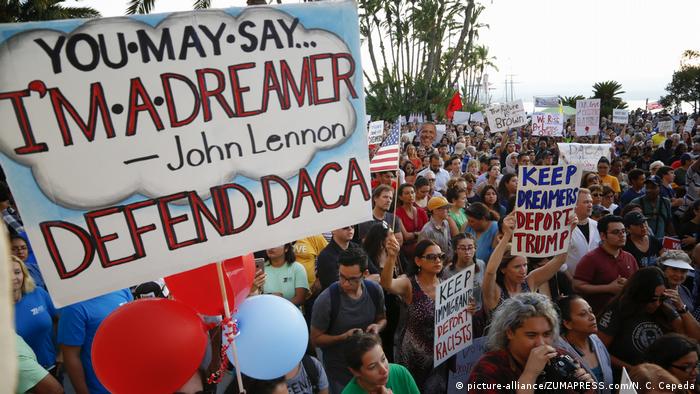 After the showmanship of a lone senator dragged out the voting process in Congress and led to a brief government shutdown, US lawmakers on Friday finally did what they had planned to do. They managed to pass a long-term budget deal that will fund the government and end the cycle of stop-gap spending measures.

The fact that a deeply dysfunctional Congress actually got its act together and performed one of its core duties — passing a budget — should not be noteworthy. However, for a legislative body that is rife not just with partisan and intra-party strife, but also gripped by an inability for political compromise, reaching a long-term budget deal is good news.

That holds true even if a key rationale for the deal is to not further alienate already deeply frustrated voters in a year where midterm elections are looming. In December, 78 percent of Americans told Gallup pollsters that they disapprove of the way Congress is doing its job. So lawmakers' self-interest to keep their seats when they face the US electorate clearly played a role in making this budget deal a reality.

What made coming to an agreement easier was the fact that the deal reached by Congress fulfills the wishes of key factions in both parties. Republican defense hawks got a whopping 10 percent increase for military spending, while Democrats can claim an equally whopping 10 percent increase for domestic, non-military spending. Democrats can also point to an extension for health care funding for children while Republicans can chalk up yet another tax reduction as a win.

The deal passed by a Republican-controlled Congress should also finally shatter the myth that budget deficits matter to either party, since the agreement not only exceeds the limits imposed by the Congress' own 2011 Budget Control Act, but because it will also drastically increase US public debt, which currently stands at $15 trillion (€12.26 trillion).

Some fiscal conservatives bemoaned the fact that such huge spending increases without offsetting cuts runs counter to the long-standing claim that Republicans are the party of fiscal responsibility. The deal, however, shows that this position ultimately is lip service when huge boosts in defense spending and tax cuts are on the table.

What's more, Republicans in reality have not lived up to the mantra of fiscal responsibility for a long time. During the presidency of George W. Bush, the last Republican administration prior to Donald Trump, US public debt more than doubled.

The deal may have many winners, particularly the Pentagon, but it has produced one clear loser — the Deferred Action for Childhood Arrivals (DACA) recipients, or "Dreamers," that Democrats had vowed to protect. With the expiration deadline just three weeks away for the Obama-era program that allows young immigrants living in the US illegally who were brought to the country as children to remain there, Democrats ultimately did what they earlier said they wouldn't: vote for a long-term budget deal that does not provide a solution for the "Dreamers."

Read more: Why Trump's immigration deal is a hard sell

Key Democrats like House Minority Leader Nancy Pelosi made an emotional plea to help DACA recipients and the party's leadership voted mostly against the deal, but that move in the end was largely for show. It was clear that dozens of Democrats would ultimately vote for the deal anyway, thereby guaranteeing its passage.

For the hundreds of thousands of "Dreamers," the deal means that they their fate now rests on the hope that the Republican Senate leadership will honor the promise they gave to Democrats — to allow a floor debate and vote with the goal of finding a solution to the DACA issue. That promise is not much to cling to. But for the sake of the the young immigrants whose fate hangs in the balance, let's hope it is enough.