In passing men's Champions League "reforms," football’s so-called protectors have let the game down, says Matt Pearson. The big clubs are once again getting what they want. In football, it seems that greed is god. 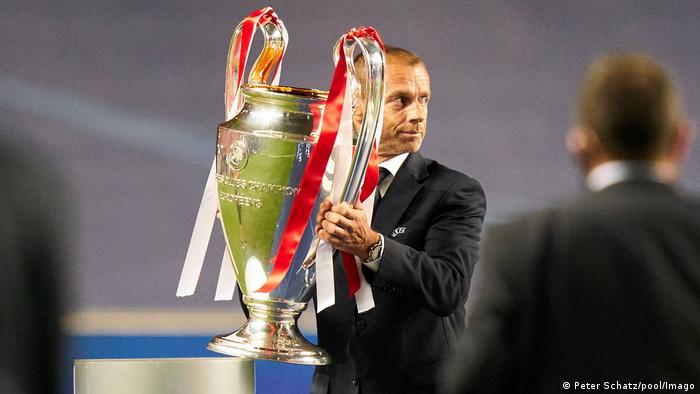 Aleksander Ceferin has expanded the Champions League from 2024

Remember the European Super League? That bright idea to have the self-selected top teams in football pass money round endlessly and shut the door behind them?

Thankfully, it burned out within a few days after fans, players and even European football's overlords UEFA balked at its greed. "Nobody wants it except the few who think that football is all about money," UEFA President Aleksander Ceferin told French newspaper Le Journal du Dimanche shortly after the proposal collapsed last April.

Just over a year later, all of the rebel clubs (except Tottenham Hotspur) sit in the top four of their respective leagues. None have been punished in any meaningful way and Ceferin has waved through a series of format changes for the men's Champions League that gives them what they want: more lucrative matches in Europe and a back door to qualification if they have a bad season.

The rich get richer

As ever, the spin is of inclusivity and sporting integrity. "We are fully committed to respecting the fundamental values of sport and to defending the key principle of open competitions," blustered Ceferin.

But of the four added places from 2024-25, one will go to national champions while the other three will go, in almost all cases, to a club from a major (rich) league.

Ceferin’s moral posturing is now further undermined by his own competition. Since replacing the European Cup (which actually did consist wholly of national champions) in 1992, UEFA’s top club competition has consistently sought to make it harder for the richest clubs to fail, financially or on the pitch. The safety net of Europa League football for teams failing in the group stages, four teams qualifying from major leagues and the uneven distribution of broadcast money are among the major bugbears.

Adding an extra spot for the league fifth in the UEFA coefficient rankings and two for the associations with the best-performing clubs in Europe in particular is a closed circle. The Premier League, for example, would be one of those leagues were the reforms to come in to play now. Given its vast resources, it’s likely to remain so, effectively granting five places to a league that welcomes Saudi, UAE and, until recently, Russian takeovers if the price is right.

Soon, one of the so-called "big six" who fail by today's standards will likely get a second bite of the cherry, rake in the Champions League cash and continue to widen the gap between them and the rest. Remind you of anything?

That UEFA has climbed down slightly on the proposals aired last year (two extra group stage games not four, no extra places based purely on coefficient) looks, at first glance, to their credit. But in reality is likely a calculated move to make it appear they've listened to voices not consumed by money, glamor and status. No doubt there will be more reforms along soon.

The Champions League has contributed plenty to the inequity of European football in the last 30 years but it’s also provided some incredible games, Real Madrid’s pickpocketing of Manchester City the most recent example. Fewer games means less jeopardy, a fundamental part of sport's appeal.

What Ceferin and co. don't seem to understand is that scarcity is also part of the competition’s pull. More games does not mean better football, but it does mean more money. These reforms are a concession to a league that UEFA pretended to be appalled by. Yet again, the Super League clubs have won.