The US midterm elections did not lead to a broad rejection of Trumpism. Instead, by taking the House, Democrats scored a must-win as the GOP gained Senate seats. Trump fever is still burning hot, writes Michael Knigge. 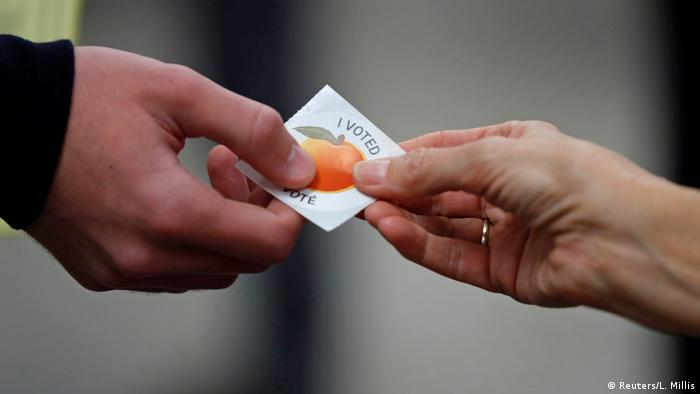 On this US election day, two years after Donald Trump won the presidency, there were no more rationalizations. No one could claim that President Trump was mostly all talk and little action. No one could posit that a Republican-controlled Congress led by experienced legislators would guide and, if necessary, rein in the novice in the White House. And no one could argue that the weight of the presidential office or administrative officials, the so-called adults in the room would prevent Trump from acting upon his worst impulses.

All those rationalizations and justifications why Trump just might be acceptable were highly dubious even in 2016. They were totally unacceptable today after the world has experienced President Trump's first two years in office. That's because if anything he has been even more toxic, vile and vicious than he was during his campaign — it's a state of affairs that was hardly imaginable two years ago.

The rabble-rouser-in-chief, who recently declared himself a nationalist, has repeatedly stoked fears of Hispanic immigrants, African-Americans, Muslims and other minorities, often by engaging in dog-whistle politics. He has brandished the media as the "enemy of the people" and Democrats opposed to his policies as "un-American." And he has done all of this by deploying rhetoric riddled with falsehoods, conspiracy theories, half-truths and outright lies as a political weapon with the goal of eviscerating the concepts of truth and fact.

But Trump also acted on his impulses. He repeatedly refused to clearly denounce the extreme right, just as in Charlottesville. He launched a brutal crackdown against undocumented immigrants already in this country and tried everything in his power to prevent various groups of non-Americans — refugees, asylum-seekers, migrants – from entering the country. He took a wrecking ball to transatlantic ties, pulled the US out of key international agreements and organizations and coddled up to autocrats.

So despite all this, how could Americans still not turn out in droves against Trump and the GOP and flip Congress?

A deeply divided country on the edge

Anyone who has traveled the country and spoken to Americans in recent months could sense that the United States is bitterly divided. While Democrats and the so-called resistance movement were deeply and rightfully enraged about Trump's conduct, the president's backers and the GOP were equally deeply, if mistakenly, supportive of the president and enraged by the Democratic outrage. Coupled with heavily gerrymandered voting maps that in many places harmed Democrats and boosted Republican efforts to suppress likely Democratic votes, a bigger Democratic sweep was always extremely difficult.

For all those reasons the midterm elections turned out the way they did. The Democrats achieved the minimum they needed and retook the House to provide some sort of check on Trump while Republicans gained seats in the Senate. This is common in midterms for the party that does not control the presidency.

But Democrats lost the expectation that they could pick up game-changing governor posts or Senate seats in Florida and Texas and perhaps even make a play for a majority in the Senate. It did not happen. The hoped for, the predicted "blue wave," did not materialize. Put differently, Trump and his supporters can and will claim that their fear-mongering tactics succeeded in shrinking the expected blue wave to a blue ripple.

Despite the Democrats pick up of the House, the picture after these midterms is extremely mixed.

The good news for the country and the world is that Trump will now finally face serious pushback on some of his most outrageous policies and that the nightmare scenario of the GOP retaining both chambers of Congress has been averted. Great news from the midterms is that a record number of women have been elected to Congress, including the first native-American and the first Muslim women, all on the Democrat side.

The bad news for the country and the world is that this outcome also signals the normalization of Trumpism, which will surely be noted by the various "mini-Trumps" all over the globe. Because of that and because we could not pretend - unlike 2016 – to not know what Trumpism is, the outcome of these midterms in some way stings even more than Donald Trump's win two years ago.

US networks drop Trump's 'racist' ad on eve of midterms

The ad showed a man who'd entered the US illegally in court bragging about killing cops and alleged that Democrats had "let him into our country." Donald Trump's team sponsored the advert as part of the midterm campaign. (06.11.2018)

Opinion: US midterms — a battle over principle, not facts

The US midterms have taken on a new dimension because Donald Trump has made them all about himself. While the vote is still wide open, the president has indelibly changed the country, says DW editor-in-chief Ines Pohl. (06.11.2018)