Opinion: The world averts its gaze from Syria's tragedy

Most of the people now entering Europe come from Syria. Despite renewed diplomatic initiatives, there is little hope for an early end to the war in their homeland, writes DW's Rainer Sollich. 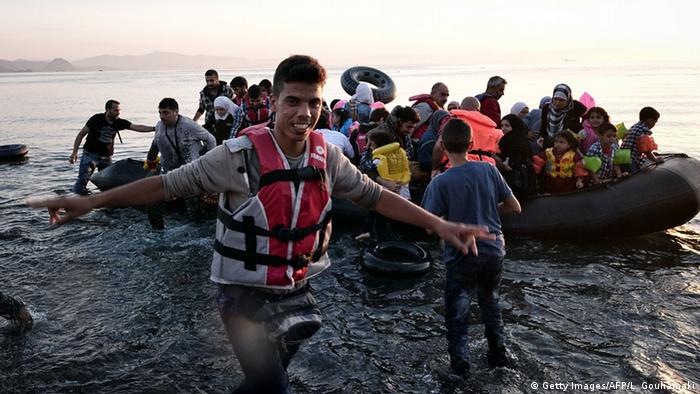 Whenever the migration crisis is debated in Western Europe, one of the standard arguments is "We must do more to tackle the root causes in the places the migrants come from." The idea is that governments might transfer more money to these places and attach as many conditions as possible to their support - in the hope that these small steps could have a positive effect, at least in the long term.

But in the case of Syria, this is not happening because Syria is at war. Neither the inhuman regime of Bashar al-Assad nor the pseudo-religious terrorists of the "Islamic State" (IS) are capable of being partners in European good-governance projects. All projects to build a civil society there have to start virtually from scratch.

The sad truth is: In Syria, there are no forces that remain sufficiently relevant that could even come into question as "partners" for peace negotiations - apart perhaps from the specific case of the Kurdish minority and a few moderate but politically marginalized opposition groups.

Over the past four years, the Syria conflict has claimed more than 250,000 lives. Sectarian hatred and vengeance have poisoned the climate for the foreseeable future. Almost half the population has fled - whether from Assad's carpet bombing, or the cutthroats of IS, or similar groups, such as the al-Qaeda-affiliated Nusra Front. Countries like Lebanon, Jordan and Turkey have so far borne the brunt of the Syrian tragedy.

But Europe, too, is increasingly feeling the consequences of this war: The vast majority of the migrants desperately trying to come ashore on Lampedusa and Kos, or cross the Macedonian border, come from the Syrian war zones. These are people Europe and the international community must help - people who deserve our protection and our support.

That's because we and our politicians in centers of power such as Washington, London, Paris and Berlin can offer them nothing else. There is no reliable prospect in sight that could stop the killing in the these migrants' homeland. Not only has the conflict between the parties on the ground prevented any substantial step towards peace, but so, too, have the conflicting interests of the neighboring countries - as well as those of Washington and Moscow.

There are only vague glimmers of hope - subtle hints that something might be going on behind the scenes that could make a difference in the deadlocked Syria question. In particular, Russia seems to be rethinking the nuances of its current strategy, as Iran, Saudi Arabia and Turkey may also be doing.

This is suggested by unusual travel activities - such as the visit of the Syrian opposition to Moscow and the Syrian intelligence chiefs' trip to Riyadh. These are meetings that hardly seemed feasible until recently.

But publicly, at least, all the players, direct and indirect, have so far stuck to their well-known positions: for or against Assad. One thing is clear: The search is on for new ways out. But so far it is not at all clear that new formulas for compromise can even be found; and similarly, the potential impact of the Iranian nuclear deal on the Syrian war cannot be reliably predicted.

The most recent United Nations initiative is worthy of all diplomatic honor. After all, both Washington and Moscow have agreed to it - and were remarkably of the same mind even when they voted on a resolution on chemical weapons operations in Syria. But this plan offers Syrians only opaque hopes: It calls on the conflict parties to form working groups and sit down at the negotiating table.

There have already been several attempts like this; they failed each time. Without a basic agreement between Saudi Arabia and Iran, and between Moscow and Washington, nothing can work.

In the meantime, the killing goes on every day. And the world remains oblivious, as it averts its gaze.

De Maiziere: Germany to receive up to 800,000 refugees

German authorities are bracing for a record-breaking number of refugees, with mass arrivals potentially continuing for "several years." Interior Minister Thomas de Maiziere has urged EU partners to do more to help. (19.08.2015)

An unprecedented number of migrants crossing from Serbia into the EU state has overwhelmed authorities in Hungary. Budapest is vowing to increase aggressive enforcement along its frontier. (18.08.2015)

Opinion: On trans rights, journalists must stand with the facts 15h ago