Opinion: The lies of Martin Winterkorn | Business | Economy and finance news from a German perspective | DW | 15.04.2019

The indictment of ex-Volkswagen CEO Martin Winterkorn is the next logical step in the aftermath of the company's emissions-cheating scandal. DW's Henrik Böhme thinks the man should now come clean. 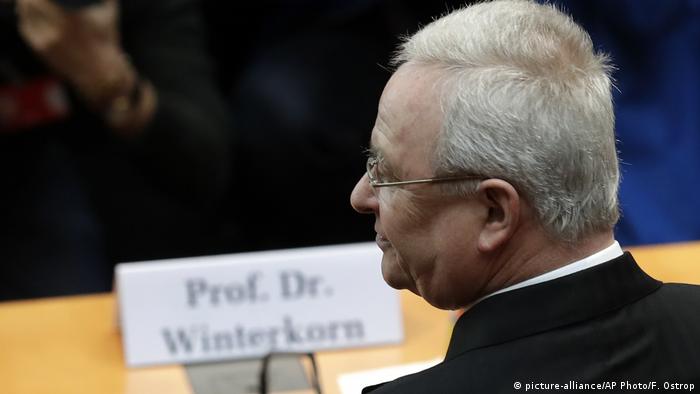 It was only a matter of time. Volkswagen Group officials can keep saying how things are looking up, while hyping the company's bright electric future, but the past will haunt them for quite a while. After the scandal over VW's large-scale emissions-cheating tests broke in 2015, prosecutors in Braunschweig, Germany, needed a lot of time to study the overwhelming amount of documents related to Dieselgate.

And now they've finally brought charges against Winterkorn, who headed the company when the scam became known publicly. They also indicted four other persons, presumably from Winterkorn's inner circle, but didn't disclose their names right away.

The charges brought against Winterkorn are not to be taken lightly. Prosecutors are talking of severe fraud and a violation of national competition laws, and they're talking of embezzlement, tax evasion and false certification. There's a lot to do for Winterkorn's lawyers who will have to fight on several fronts at the same time. The US has already issued an arrest warrant against him, and the SEC financial watchdog charged Winterkorn a month ago for what it believes boiled down to cheating investors.

For VW, it's now also getting too close for comfort in Germany. Although the carmaker is most likely not in for the same magnitude of fines as imposed by the US ($30 billion, €26.5 billion), the company's image is suffering heavily from ongoing litigation battles. Every time nasty headlines about VW crop up again, potential car buyers will be reminded of the cheats there.

It's not just about Winterkorn and the four others in the dock in Germany. Braunschweig prosecutors are investigating a total of 36 people including the former chief financial officer at VW, Hans Dieter Pötsch (who now heads the supervisory board). Also in the crosshairs is VW's current CEO, Herbert Diess. On top of that, investors have teamed up for a class action suit to establish their right to compensation worth billions of euros.

In a nutshell, the road toward VW's electric future is being marred by court trials. How will Germany's best-paid pensioner (Winterkorn gets €1,300 daily) peform before the judges? Will he plead guilty or keep telling people he didn't know anything about any emissions-cheating tests?

So far, he's been muddling through doing the latter. Winterkorn had made a name for himself by knowing every technical detail about "his" cars, and yet he didn't ask any questions why Volkswagen's diesel cars were suddenly so clean. If the man wants to rescue anything from his lifetime's work, he should finally start telling the truth.