Belgium's regional government of Wallonia continues to block the EU-Canada trade deal and wants to delay its signing. Europe has been left standing disgraced at the end of its summit, writes DW's Barbara Wesel. 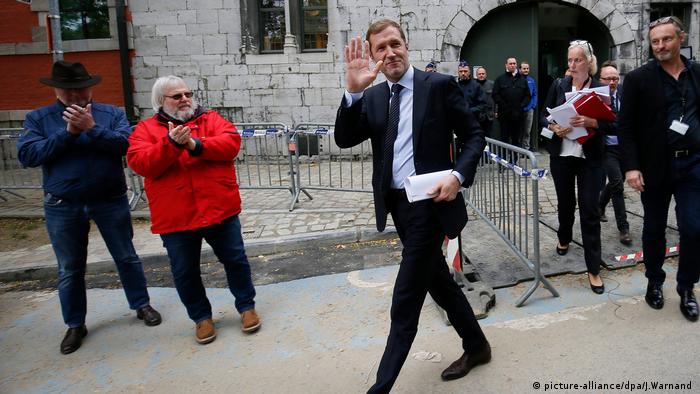 It is an extraordinary political spectacle: a region that makes up only 0.7 percent of the European Union population is holding the rest of the half-a-billion people in the bloc hostage. On the first day of the EU summit in Brussels, the Walloon Prime Minister Paul Magnette (pictured at top) raised hopes of overcoming the gridlock through further talks. Frantic overnight negotiations were conducted - with no success. On Friday, Magnette, unmoved, continued to gamble and coolly asked to postpone next week's EU-Canada summit with Canadian Prime Minister Justin Trudeau.

Everything has ground to a halt

What is this all about anyway? A region that accounts for only 15 percent of Belgian trade is making the deal with Canada a matter of life or death. The exchange of goods between Canada and Wallonia is worth 150 million euros ($163 million) a year at best. Could the EU not just transfer the money to the stubborn province and effectively buy Wallonia out of the deal?

Of course that cannot be done. Wallonia's resistance is based on general opposition to globalization, which mainly plays on emotions, largely ignoring facts. CETA opponents say that world trade is bad and they generally demonize free trade agreements. They do not at all take into account that the agreement has been adjusted to suit European norms.

Wallonia is blocking CETA because it has the legal right to do so and considers it to be ideologically useful. It is like the tiny train drivers' union in Germany that brought transportation to a grinding halt two years ago simply because it could.

Domestic politics on a European stage

This farce also reflects domestic politics in Belgium. The central government, run by Prime Minister Charles Michel, basically incapacitated itself politically when it ceded so much power to its three regions that they now also can decide on international agreements.

The result is obviously absurd. By that reasoning, why shouldn't a larger, economically more significant region have a say in the deal if a small one like Wallonia can? The Belgian problem has nothing to do with reason or democratic representation, but instead, dysfunctional government structures.

A huge disaster for the EU

Haggling with Wallonia has proved to be a political disaster for the EU. The largest trade bloc in the world has allowed itself to be made a fool of. The EU will face disgrace if the impasse is not solved in the next few days. Who will want to negotiate a trade agreement with Europe in the future if any region can throw a spanner in the works?

The worst part of all is that the EU has become the subject of international scorn and derision. If the the bloc no longer has the capacity to conduct trade, one of its main strengths, then Brussels might as well close up shop.

Have something to say? Add your comments below. This thread closes automatically 24 hours after publication.

EU leaders have ended a Brussels summit without agreeing on a free trade deal with Ottawa as Belgium's region of Wallonia refused a last minute offer. Canada's trade minister said the deal was "impossible" at the moment. (21.10.2016)

At an EU summit in Brussels, Belgium's Wallonia region has again rejected a proposed free trade deal between the EU and Canada, known as CETA. It says that its demands are not being met. Brussels is losing its patience. (21.10.2016)

Opinion: On trans rights, journalists must stand with the facts 3h ago