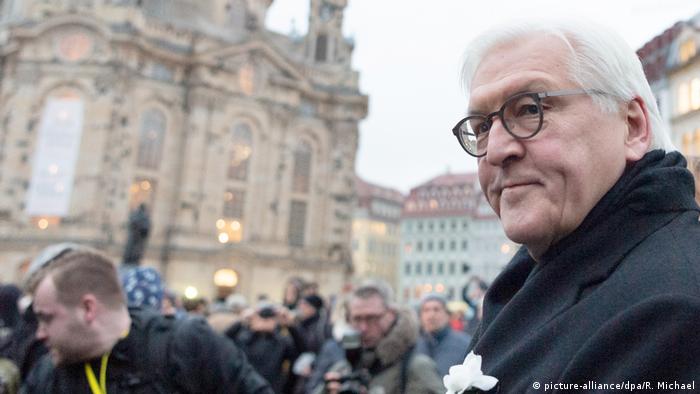 Any speech commemorating the horrific bombing of Dresden in February 1945 is a high-wire act. The firestorm that scarred the Saxon city on the banks of the Elbe has been repeatedly instrumentalized by various groups over the years — first the Nazis, then the East German government and today the neo-Nazis and those who remain stuck in the past.

Often, such opportunistic misuse has ended in an absurd argument over the number of people that died in the attack. The Nazis, for instance, mendaciously claimed that several hundred thousand people were killed. Yet, since German reunification, the fight has mainly been over the question of whether the tragedy should be remembered as an isolated event, or whether the memory of victims would be better served when viewed in the larger historical context of the war.

Frank-Walter Steinmeier was well aware of the scrutiny his words would be subjected to when he wrote his speech. The German president not only mastered the task of presenting context, he also delivered a very timely speech that openly addressed the origins of the war and the destruction that followed. In fact, the word Dresden didn't even come up until he was three long paragraphs into his address. Instead, Steinmeier began by speaking about the German invasion of Poland and the ensuing violence that was unleashed across Europe.

The president did not, however, relativize Dresden's suffering at any point during his speech. In fact, he did quite the opposite. He painted a visceral picture of that night with stark words — describing the howling drone of bombers, the blood-red sky, the fire that sucked the oxygen out of the city's streets.

But he also spoke of other cities across Germany and Europe: Hamburg and Würzburg, Naples and Genoa, Warsaw and Coventry. Steinmeier ended that portion of his speech with a clear statement: "Those who today seek to weigh the number of dead in Dresden against the dead of Auschwitz, who seek to downplay German misdeeds, who distort historic facts although they know better, it is those people that we, as democrats, must stand up to."

Read more: Commemorating the legacy of the WWII bombing of Dresden

With the words, "we, as democrats," Steinmeier also made it clear that he is well aware that some German politicians choose to deny the country's Nazi past, and he drew a clear distinction between them and himself. He also drew an altogether new interpretation of the role of the German president. Historically, the role of president has been to remain neutral — reflecting, summarizing and moderating the myriad opinions held by the country's populous. But now is not the time for such neutrality.

Steinmeier even dared to go a step further, addressing the resurgence of anti-Semitism and xenophobia: "When elected parliamentarians mock the institution in which they serve, they are attempting to destroy democracy from within." Right-wing populists in the Bundestag and state parliaments will know full well who he is talking about. And yes, all of that has its rightful place in a speech marking the 75th anniversary of the bombing of Dresden.

Steinmeier also spoke of the one thing that should unite all Germans: the Basic Law, the foundation of Germany's democracy. "Let us protect the dignity of every human, also here in Dresden," he said, referring to the rights of every person, not just every German.

Steinmeier will have no problem living with criticism of his speech from the far right; it won't be the first time he's faced it. But it's more comforting than ever to know the president clearly sees himself as a defender of living democracy. A democracy not solely defined by laws, regulations and parliamentary rules, but rather by insights, clear positions and historical responsibility. A clear majority of Germans share Steinmeier's views. And it's good that he has raised his voice in their defense.

Kuwaiti government steps down 3h ago

What awaits the people in Russian-annexed Ukraine? 4h ago