Opinion: Pope Francis clearly points the finger at Russia | Europe | News and current affairs from around the continent | DW | 04.05.2022

In an unusual interview, Pope Francis finally blames Putin as responsible for the war and suffering in Ukraine, writes DW's Christoph Strack. 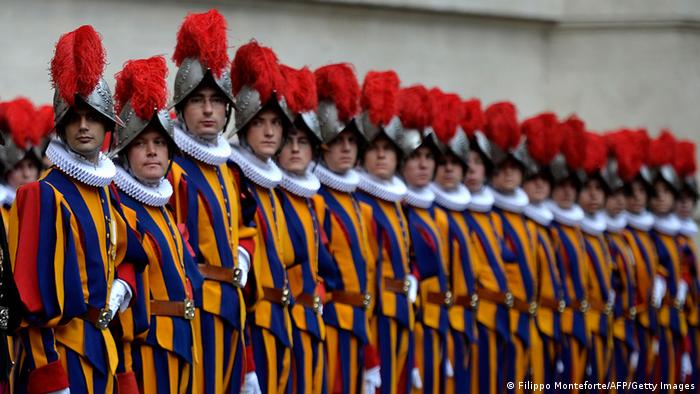 The Pope's army: The Swiss Guard are an elite military corps — and yes, they have to be Swiss citizens

Pope Francis did not mince words. He named Russian President Vladimir Putin as responsible for the Russian aggression in Ukraine. He compared the deaths of thousands of innocent civilians to the genocide in Rwanda, and showed contempt for the head of the Russian Orthodox Church, Patriarch Kyrill of Moscow, defying conventions of respect.

Since the Russian invasion of Ukraine on February 24, the head of the Catholic Church has repeatedly expressed his empathy for the suffering of the Ukrainian people, while remaining silent about the cause of their suffering. As if a force of nature had swept over their country. Perhaps the most spectacular move was his ride in a small car, with little fanfare, to make a personal visit to the Russian Embassy to the Holy See. He said that he wanted to make a "clear gesture for the whole world to see."

'How many divisions does the pope have?'

But now Francis has put an end to weeks of diplomatic speeches that refrained from blaming anyone. He granted an interview to the leading Italian daily Corriere della Sera. However, it was published in the form of a regular article, not as a standard interview. Given the topic, this is somewhat surprising.

"How many divisions does the pope have?" is a question attributed to Soviet dictator Joseph Stalin — he is said to have used these words in 1945, in the final phase of the Second World War, to make clear his contempt for the spiritual leader with regard to his role as an ally of the Allies. Wars, Stalin said, are fought "with soldiers, cannons and tanks."

Now, 77 years later, Russia's president seems to have similar ideas to Stalin. In the interview, Pope Francis said that he wanted to visit Putin in Moscow and that the Cardinal Secretary of State Pietro Parolin had conveyed this wish to the Kremlin weeks ago — but so far to no avail. Francis is still waiting for an answer.

These remarks were voiced amid musings about knee pains and Italian domestic politics, and appear to be the next stage in the odd public relations strategy of a pope, who sometimes behaves like a suburban priest in Buenos Aires, even in such important matters. It is as if he thought to himself: "let's talk to the editor-in-chief." Gone are the days when significant remarks about a global issue, such as those in the article, were addressed in a speech to the diplomatic corps.

Perhaps this is the pope's answer to Stalin. The head of the Catholic Church still has no weapons, and only a very small army in the form of the Swiss Guards with their colorful outfits. If the pope has any troops, it is the media, public opinion, his judgment.

And his judgment this time is suprisingly clear. In more normal times, it would have created a scandal from an ecumenical point of view: The pope pointed a finger at his Russian Orthodox counterpart, one who has long cultivated close ties with the Kremlin and President Putin, and now tirelessly dresses up the atrocities committed by the Russians in Ukraine in some theological guise.

In terms of protocol, the two men are equals: At their only meeting to date, they greeted each other with an embrace and addressed each other as "brother in Christ." In the newspaper, Francis described the bizarre scene of Kyrill reciting pre-formulated "justifications for the war" for 20 minutes during a Zoom call. The pope described the patriarch as a "state cleric" who used the language of politics, and warned him not to "become Putin's altar boy."

Will it be business as usual after this strange interview? Is the pope simply a smooth talker without troops of his own? Given what was heard today in Rome, let us hope not. A very knowledgeable Spanish-language Vatican portal has reported on extensive efforts by church leaders to set up an international peace conference. Apart from Pope Francis, the Cardinal Secretary of State and the Vatican Foreign Minister are mentioned, as is the Helsinki Conference, which could serve as a possible format.

During the Cold War, at the 1975 Conference on Security and Cooperation in Europe (CSCE) in the Finnish capital, the US, Canada, the Soviet Union and about three dozen European states made a groundbreaking commitment to cooperation, respect for the inviolability of borders, and to the peaceful resolution of conflicts. This remains a great European moment to this day.

Helsinki reloaded? Can Pope Francis and the churches work towards such a goal? If they do not have troops, do they have enough diplomatic allies? Perhaps the interview, with the pope's clear criticism of Russia and soft criticism of the West's logic of weapons, is a step in this direction — even if the daily news and terrible pictures from Ukraine leave little room for hope right now.