Opinion: No way back in Burundi

The coup in Burundi has failed. The ringleaders have surrendered, some are in jail and President Nkurunziza is still in power. But there's no way back to life the way it used to be, says DW's Claus Stäcker. 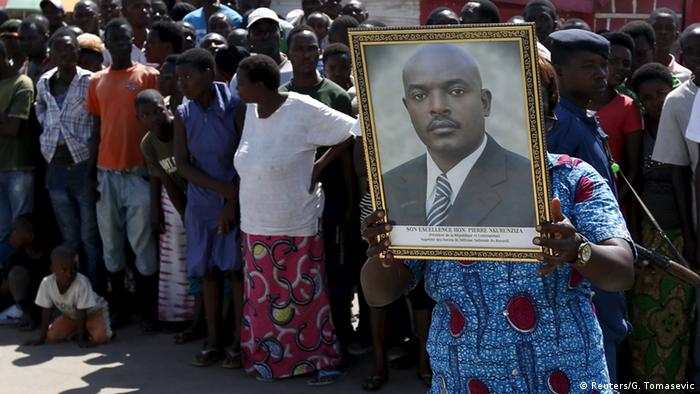 President and former rebel leader Pierre Nkurunziza has once again proven to be a good soldier, one who knows how to rally his troops. He successfully prevented being displaced at gunpoint. The East African Community (EAC) backed him in his darkest hour. Africa does not want the leadership of any country "to be assumed by the barrel of a gun," Tanzanian Foreign Minister Bernard Membe declared. The African Union (AU) also condemned the coup leaders and criticized "any attempt to seize power through violence."

All of this sounds reasonable on paper - as if Africa were a hotbed of democratically minded leaders. That, unfortunately, is not the case. To this very day, Africa's supranational organizations take a mild view of leaders who secure their power "with the barrel of a gun." Robert Mugabe, the 91-year-old head of the AU, is a prime example. No African institution has ever seriously tried to stop Mugabe's crusade against his critics.

A glance at a map of Africa, from east to west along the Great Lakes, gives you five heads of state who have absolutely no intention of voluntarily letting go of power. Burundi's still legitimate President Nkurunziza is one of them. He hasn't recognized the signs of the times, and he has crossed the Rubicon. Despite his victory over the rebels, he is a failed president.

Nkurunziza threatened constitutional judges, military officers, politicians and journalists. He ordered the police to shoot civilians. After 10 years of cautious stabilization, he veered off the path of reconciliation, reconstruction and democratization. He re-militarized Burundi. His youth militia spread fear and terror to ensure his re-election. They intimidated political opponents and broke a taboo by blaming the Tutsi minority of a conspiracy.

Giving the conflict an ethnic component is one of the main dangers for the region. It wakens dark memories of the 1993- 2000 civil war, when Hutu commandos went wild and killed hundreds of thousands of Tutsis, just like they did in neighboring Rwanda.

Ghosts of the past

There, President Paul Kagame, a Tutsi, has a wakeful eye on the situation, fearful that the remainder of the marauding Hutu troops, the FDLR that are hiding out in eastern Congo to this very day, will enter the conflict. Kagame has proven in the past that he will not hesitate where his sworn enemies are concerned.

In that case, Burundi's domestic conflict would finally cross national borders. From a humanitarian point of view, it already has. Rwanda, Tanzania and Congo report more than 100,000 refugees. More than 50,000 Burundians are crowded into a village on Lake Tanganyika, waiting to board a boat bound for Tanzania. A new refugee tragedy is in the making.

Nkurunziza is at the crossroads of dictatorship and dialogue, war and peace. His power base is in the countryside, while in the cities, the majority oppose him. It's the young people who represent a still weak civilian society. They no longer want to suffer autocrats dictating their lives and futures nor do they want to put up with rulers like Nkurunziza interpreting the constitution in his favor. It's a pattern of opposition that has taken hold in Burkina Faso and Senegal, the Democratic Republic Congo and now reaches into Burundi.

The 2000 Arusha Peace Agreement clearly stipulates limiting the presidency to two terms. All contemporary witnesses are very clear on that. The Burundian Constitutional Court came up with a different ruling by resorting to a legal trick. By that time, it was no longer an independent vote. Judges, the media, the army and even government bodies are split over the issue.

President Nkurunziza can only achieve a turn for the better by renouncing another term in office. It's time to signal reconciliation to his opponents, and offer a dialogue. What will be crucial is how he deals with his enemies - including the coup leaders. Elections are unthinkable in such a framework. Even the African Union shares that point of view.

What is possible is an interim phase that initiates a fair election process. But unless he resorts to violence, there is no way back for President Nkurunziza.

Burundi's president has now returned to the capital following a failed coup. But despite the calming of tensions, the turmoil has prompted a mass exodus, threatening neighboring Tanzania with a humanitarian crisis. (15.05.2015)

Following days of chaos and claims by a military general that the government had been toppled, Burundian President Pierre Nkurunziza says he has returned and regained control of the capital. (14.05.2015)

Algeria election gets low turnout amid opposition boycott 3h ago

Opinion: Pakistan is pursuing an unrelenting assault on journalism 1h ago