Loyalist troops in Burundi have arrested at least three people over their role in a failed coup. Authorities say Major General Godefroid Niyombare, who led the attempted putsch, is still "on the run." 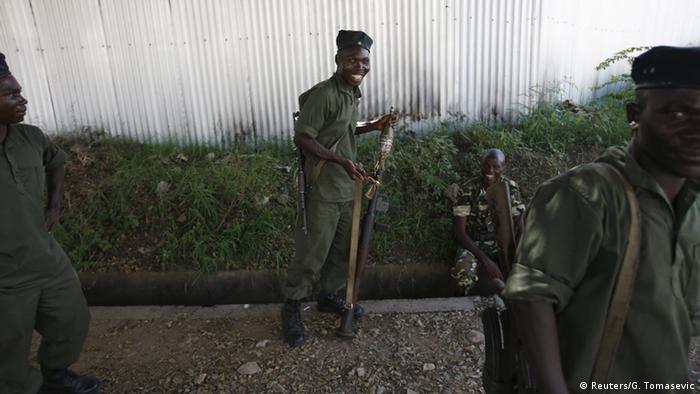 Authorities in Burundi say they have detained at least three senior figures behind a bid to overthrow President Pierre Nkurunziza.

Presidential spokesman Gervais Abayeho told Reuters on Friday that a policeman and two army generals, including former Defense Minister Cyrille Ndayirukiye, had been taken into custody. He added, however, that the coup's leader Major General Godefroid Niyombare was "still on the run, his whereabouts are not known to us."

Niyombare, a former intelligence chief, told news agency AFP via telephone that troops loyal to the president were approaching him, although it's not clear what happened to him after that.

"We have decided to surrender," Niyombare said. "I hope they won't kill us."

General Ndayirukiye, who is second in command to coup leader Niyombare, conceded earlier on Friday that the coup had failed.

"We were faced with an overpowering military determination to support the system in power," he said.

The admission came after the presidency announced that Nkurunziza - who had been attending a summit in neighboring Tanzania when the coup was declared - had returned to the country.

One of the deciding blows was the mutineers' failure to take control of the RTNB national television and radio complex in the capital. The control of the broadcaster was seen as vital to control the flow of information.

The coup attempt had raised fears of a return to civil war in the impoverished central African country, where hundreds of thousands were killed in a 13-year armed conflict that ended in 2006.