Opinion: Justice is elusive as Syria marks 10 years of war

Ten years after Syrians dared to dream of dignity and freedom, the devastation is beyond comprehension. There is no way back to 2011, and justice is the only way to heal, DW's Maissun Melhem writes. 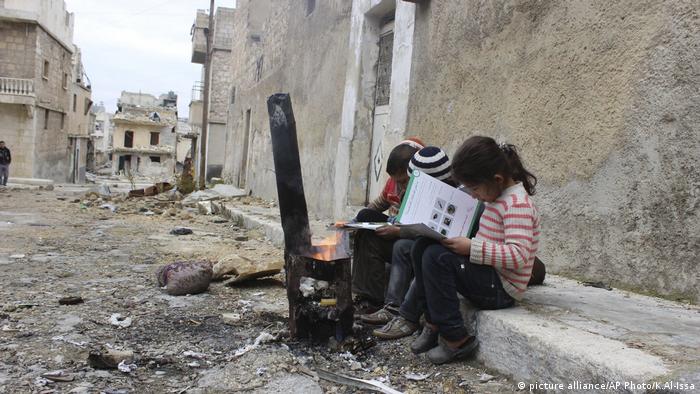 In 2020, when ceremonies were still possible, and filmmakers and stars were able to meet at the Academy Awards in Los Angeles, many Syrians had a reason to rejoice. Two films from Syria had been nominated for best documentary: The Cave, about an underground hospital in eastern Ghouta run by a team of female doctors who treated victims of the government's airstrikes on the suburb of Damascus, the capital, and For Sama which was directed and shot by the Emmy-winning filmmakers Waad al-Kateab and Edward Watts over five years in the besieged city of Aleppo. Al-Kateab, who appeared on the red carpet with her daughter Sama, to whom the film is dedicated, made headlines for the gown she wore inscribed in Arabic: "We dared to dream, and we will not regret dignity." The sentence would become a mantra for Syrians who are celebrating the 10th anniversary of their revolution against one of the most brutal dictatorships of our time. Watching this and recalling the haunting pictures of the past 10 years, I ask myself: Do we really not regret it?

The summer of 2011 was full of hope. The Arab Spring seemed to be bearing fruit. Decades-old authoritarian regimes were collapsing under the pressure of peaceful demonstrations on the streets and social media. The movement inspired the pupils in the southern Syrian city of Daraa who wrote on a wall of their school: "It's your turn, Doctor" — in reference to the British-trained ophthalmologist Bashar al-Assad, who'd inherited the presidency of Syria from his father, Hafiz. Unsurprisingly, the schoolchildren of Daraa were arrested and tortured, and soon a wave of protests spread across the country and even among Syrians living in the diaspora. The freedom marchers of the summer of 2011 used to hold flowers in their hands as they chanted for freedom and dignity. It was a movement beyond politics. It addressed social questions and inspired new forms of arts and many love stories. It had the vision of acceptance and inclusion for everyone. It was a kind of a Syrian summer of love.

My son is a product of this Syrian summer of love. When I gave birth to him, motherhood not only made me kiss my 20s goodbye, it also successfully distracted me from the devastation that had started taking on dimensions that were beyond my ability to comprehend. The atrocities that Syrian civilians were subjected to had evolved from live fire opened on peaceful protesters to targeting public gatherings with barrel bombs and Scud missiles and eventually to deploying chemical weapons against a whole suburb, leaving more than 1,300 civilians dead. The peaceful freedom marchers of 2011 became fewer. Many Syrians had to choose between surrendering to the old regime and joining the militant rebel groups that continued drifting toward Islamist fundamentalism until an amorphous assembly of Salafist militias became the international community's perception of the opposition.

While I was busy caring for my child and following my career in Berlin, years went on, and so did the suffering — even for those Syrians who had managed to escape the inferno to one of the neighboring countries. They found themselves standing before a void life that became a day-to-day thriving to keep one's head above water in the absence of any sort of social safety for noncitizens in their guest countries. Some went insane, others left our world silently or were swallowed by the Mediterranean, and some made it to Europe or North America. Among the latter, some have decided to continue the struggle against the authoritarian regime in Damascus by prosecuting Assad and his relatives and associates and holding them accountable for the crimes they committed.

I am one of the lucky Syrians who were able to have a life away from the war. Still, I am haunted by the events of the past 10 years. Ten years after the birth of the utopian dream of freedom and dignity, the news from and about Syria can't be more surreal: A group of displaced Syrians founds a football team for amputees who lost pieces of their bodies in the war. Some Syrian refugees show outstanding skills in mending and rebuilding their tents by themselves after each storm. The Syrian president suggests that TV stations cancel any cooking shows to not offend the audience, who are barely able to afford bread.

Sitting in my safe home in Berlin and reading about all of this and about Syrian mothers starving to give food to their hungry children, I don't know whether I have the right to regret or not regret. Was the inscription on Waad al-Kateab's dress at the Oscars like the let-them-eat-cake advice of Marie Antoinette? I don't know. What I know is that Syria is a wreck, and there's no way back to 2011. But, through reconciliation, there is a way out, and only transitional justice can help Syrians reconcile with each other and with the past 10 years on their way to healing. The efforts of Syrians in Europe and North America to hold Assad, his family and their close network of associates accountable for their crimes are the first steps.

Olaf Scholz formally sworn in as German chancellor 33m ago