Opinion: It is time for Hamburg to accept their fate | Sports| German football and major international sports news | DW | 24.02.2018

Opinion: It is time for Hamburg to accept their fate

After 11 league games without a win, Hamburg are staring relegation in the face. Based on recent performances, the second tier is where they belong — and there are no bonuses for being the only Bundesliga ever-present. 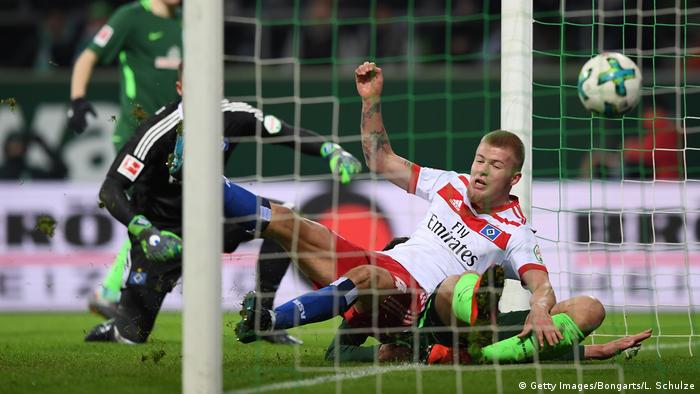 Nordderby encounters are notoriously fiery affairs and the latest rendition had an extra sprinkling of importance in the context of a relegation six-pointer.

For Hamburg, pride was not the only thing at stake. The trip to Bremen offered a potential lifeline in the midst of the worst top-flight campaign in the club's history, yet it was their rivals celebrating a six-point swing come the final whistle.

The magnitude of the situation was not lost on the HSV players, who dug deep to produce a gritty performance, but  ultimately overthought and under produced yet again. Their attacking intent was uninspired, while their backline had more than a few questionable moments.

However, poor performances only scratch the surface of the predicament the Bundesliga dinosaurs find themselves in.

Sporting director Heribert Bruchhagen attempted to deflect from the deep-rooted flaws stifling this former giant of German football by voicing his frustrations at the fans, who put on a pyrotechnic display, and the decision makers out on the pitch.

"I don't know what these guys are doing” and "anyone that's played football can see it was offside”, were just two quotable moments from a long-winded rant.

Being confronted with footage that showed Ishak Belfodil to be in line with the ball at the time of Aron Johannsson's pass, while humorous for the viewers, only half defused his evident frustrations.

Irrespective of whether it was or wasn't the right decision, it's baffling that Hamburg haven't learned that shifting the blame does not solve their problems, motivate over-paid players or get the fans on their side.

Hamburg have squandered countless opportunities to conduct a productive, introspective analysis in recent seasons. They haven't learned from past mistakes, they have demonstrated no long-term ambition beyond staying up and have used up an enviable amount of lives. In cat years, they'd already be dead. In gaming terms, they've had a cheat code.

"If they keep playing like this then they deserve to go down, only a miracle will save them now, because they don't have any easy run-in,” said Bundesliga legend Lothar Matthäus on Sky following the Nordderby. "We saw a lot of fight from these players, but fight alone won't keep you up.”

Going through 16 head coaches in the last decade has prevented the club from enjoying any semblance of stability. If Hamburg have been a fighter surviving on the ropes in recent campaigns, they now have their hands down and are primed for the knockout.

One foot in the grave?

Last season they beat the drop courtesy of a 2-1 win over Wolfsburg on the final day, and it was the two-legged relegation play-off saved them in 2014 and 2015. Seven points adrift of Mainz and with no end to their poor form in sight, they may not even get that chance this season.

"HSV have used up all their luck in the last few years,” concluded Matthäus. "I feel for the Hamburg fans, but I'm convinced that they don't have a miracle in them and that they'll be in the second division next season. Perhaps they'll follow in Hannover and Stuttgart's footsteps and bounce back.”

I agree with Matthäus' first point, but don't believe they're capable of solving their issues in a single season. While it would be a shame to see the Bundesliga to lose a traditional heavyweight, for the good of Germany's top flight and Hamburg as a club, it's time to put them out of their misery.