Opinion: Is 'Emperor Abiy' at the gates in Ethiopia?

The exact details of last weekend's foiled "coup" in Ethiopia still remain unclear. But the prime minister and his government could emerge strengthened from the crisis, writes DW's Ludger Schadomsky. 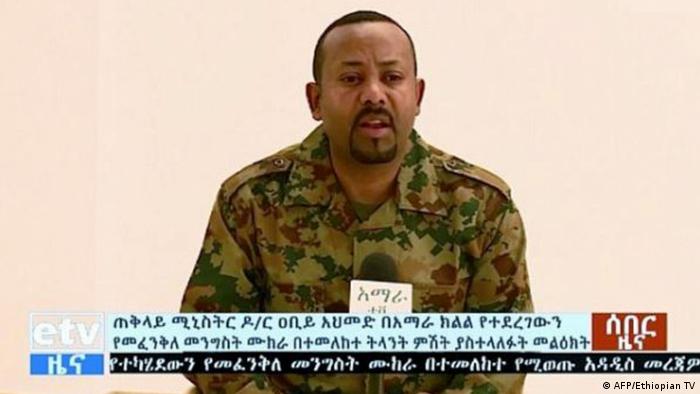 "A new horizon of hope" is emblazoned on the official letterhead of the new government that assumed power in Ethiopia around one year ago.

But has last weekend's bloodshed extinguished the glimmer of hope that Ethiopia was on the path toward becoming a united, democratic country?

It's hard to say at this stage. So far, only Ethiopia's authorities are calling the bloodshed a "coup" attempt. But the orchestrated operation that resulted in the killing of five high-ranking military officers raises serious questions about Ethiopia's ability to evolve into a stable democracy.

One thing seems certain: The elections, which were planned for May 2020, will not go ahead. Indeed, even the nationwide census, which had been planned as a litmus test prior to the vote, was called off. This means the electorate will not be able to democratically legitimize Prime Minister Abiy Ahmed's reform agenda, as he had so dearly hoped.

And it is not the only area in which the new strongman appears weak. Ethnic tensions persist throughout the land, and with millions of internally displaced people, the proud nation provides the setting for Africa's biggest refugee crisis.

Is governing even possible with such a powerless leader at the helm?

Well, there is another interpretation, now that the country's deeply rooted ethnic chauvinism has reared its ugly head for all to see. The prime minister — who won office on a ticket of reconciliation — may seek to rule with an iron fist. Abiy loyalists are set to be installed in key positions in Ethiopia's regions, the military and the secret service. The young reformer has finally replaced naivete with the "road map" Ethiopian citizens have long demanded.

Ultimately, supporters of this theory predict, the head of government will become something of an absolute monarch with complete power. This would not even come as a surprise, given that he has flirted with the idea of extensive presidential powers before.

Fortunately, for now, this remains just one possible, albeit worrying, scenario. And one should not pretend Ethiopia is imminently facing a return to old, authoritarian times. But if Prime Minister Abiy Ahmed's "new horizon" reform agenda is to bear fruit, he will have to govern with greater determination. He will also need to maintain support for the project among the estimated 105 million Ethiopians, even across ethnic lines.