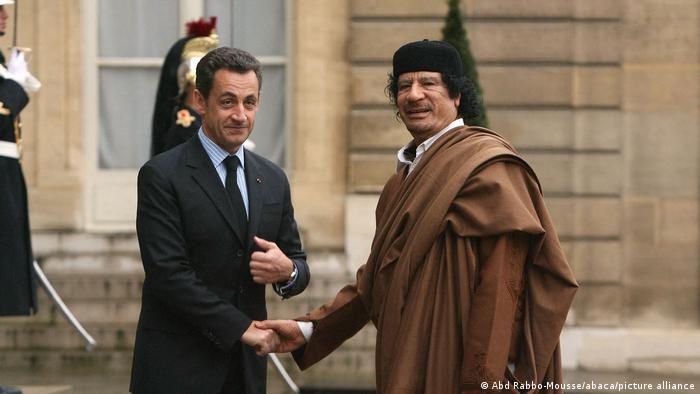 A photo from better times for Nicolas Sarkozy: Shaking hands with Libya's dictator Muammar Gaddafi in 2007

It's not as if Nicolas Sarkozy has to go to jail with drug dealers and car thieves. If his sentence is upheld on appeal, he can stay in the comfort of his own home with an ankle bracelet. His wife, the singer-songwriter Carla Bruni, can play him a song on the guitar with a chorus that goes: "You can do a lot of things, just don't get caught."

So much piled up over time in the Sarkozy era. While the French were amused by the details of his love life, his political activities only emerged later. He was convicted because the court considers it proven that he bribed an attorney general in 2014 to obtain information about an investigation.

It was all there, from burner phones and wiretapped calls, to a luxury posting in Monaco — the court files have enough material for a fine screenplay. And that's not all: In an earlier trial, Sarkozy was acquitted on charges of having accepted undeclared donations for his election campaign from Liliane Bettencourt, the L'Oreal heiress. The allegations were a burden for years.

And the judiciary is not even done with the ex-president yet.

A trial for illegally financing his 2007 presidential campaign begins in two weeks. Sarkozy allegedly received €50 million ($60 million) from former Libyan ruler Muammar Gaddafi, of all people. Another investigation is looking into his consulting work for a Russian company, including awkward questions about employing his first wife as a staff member.

Sarkozy is the second former president to be convicted by a French court. In 2011, Jacques Chirac was convicted of embezzlement and misuse of public money when he was mayor of Paris. The most spectacular trial, however, was probably that against Francois Fillon, who paid his wife a salary as an employee for years even though she never worked. The verdict destroyed the conservative presidential candidate's career and opened the door for Emmanuel Macron.

Accepting benefits as an official privilege

Things were different just a few decades ago. Charges against Valery d'Estaing of accepting diamonds from the notorious Central African dictator Jean-Bedel Bokassa, came to nothing. And somehow, people just accepted the fact that Francois Mitterrand set up his mistress and their daughter in a state apartment guarded by police officers. For a long time, different rules applied to the ruling class in France. That is the reason the French are so angry at their politicians. 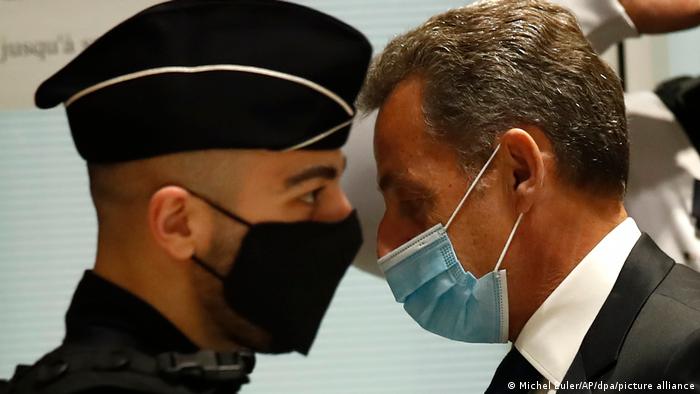 For several years now, the judiciary has increasingly prosecuted offenses committed by politicians that would have previously been swept under the carpet. The public's expectation of a fair trial against everyday people and those with power has risen. Old ties are offering less and less protection — the recent sexual assault investigations against Paris society bigwigs points to a change in climate.

Hardly any chance of a comeback

Of course, judicial proceedings, like the one against Sarkozy, are also fraught with danger. After all, it was he himself who claimed the whole thing was a witch hunt. And, it is entirely possible to exploit such trials against politicians from the other side purely for political gain. It will then need to be proven just how objectively and independently the judiciary goes about its business.

The verdict is a blow for the ex-president. It is said he flirted with the idea of making a political comeback in next spring's presidential election, as the conservatives are without a credible candidate. Sarkozy can of course continue to pull strings within his party but campaigning for the presidency with a criminal record will be difficult. Nevertheless, the verdict against him is a sign that no one is above the law. It is an important sign to those frustrated and disillusioned in France.

Germany's Angela Merkel can "see everything and forget nothing," according to ex-French President Nicolas Sarkozy. At one point, the German chancellor gifted Sarkozy a DVD of a German film set in East Berlin.

Ex-French President Sarkozy has blamed Gadhafi supporters for allegations that he accepted campaign funding from Libya in 2007. In his statement to investigating judges, he said evidence for the charges "did not exist."

What's in a name? Nicolas Sarkozy and 'his' republic

Former French President Nicolas Sarkozy plans to rename his party. If he gets his way, it will be called "Les Républicains", "The Republicans." Resistance, however, is already building up.

Scotland: Hopes of second independence vote on "knife-edge" 6h ago

Opinion: COVID vaccine patents are not the issue 26m ago