When it comes to drafting a constitution, the concrete details aren't what's important. What matters is the underlying concept of humankind, which confers dignity on every human being, writes Alexander Görlach. 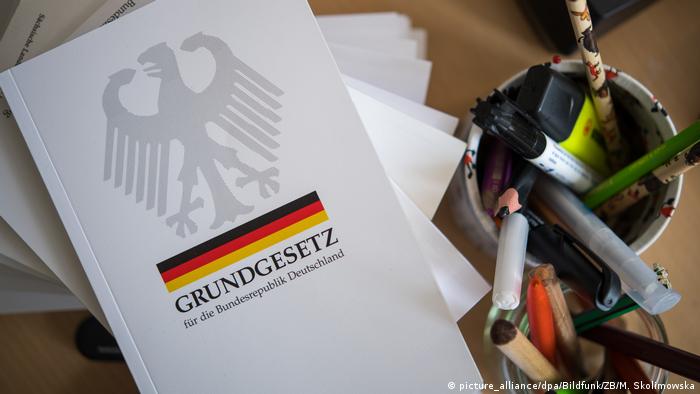 Germans are currently celebrating the 70th anniversary of their country's constitution, known as the "Grundgesetz," or Basic Law. This is a good occasion to reflect on the blessings of constitutionalism. This cumbersome word represents the final result of a centuries-long process of thinking and talking about human rights, to achieving binding legal codification. When we talk about democracy today, we do not mean "liberal" or "illiberal" (because there is no "illiberal democracy"), but rather, constitutional democracy.

Everyone has equal rights

In this context it is irrelevant whether this is a parliamentary democracy, as in Germany, or a presidential democracy, as in the United States. Both are based on the idea that all human interaction on a governmental and public level has to happen on the basis of a dignity that is inherent to all human beings from birth. This means that the legal order is based human rights, which in principal sees everyone as equal and no longer draws a dividing line between those who belong to it and those outside it (which, for example, is propagated by religious legal concepts such as Islamic law).

When we say that democracy is in crisis, we actually mean that constitutionalism is in crisis. And that is much worse, because a parliament can be re-elected. One can even, at least in theory, legitimately change the constitutional framework within which a democracy operates. But human rights cannot be "changed" or even "abolished."

So what does it mean to say that constitutionalism is in crisis? The late liberal thinker Lord Ralf Dahrendorf wrote that a constitution based on human rights grants and guarantees citizens civil and social rights. Both are equally important, because what would be the point of having the right to vote, but not the opportunity to receive an education or to put a roof over your head?

Participation is only possible in conjunction with social rights

The combination of social and civil rights enables citizens to partake in democratic life, both in material and nonmaterial ways. But household incomes of ever wider sections of the population have been stagnating in many Western democracies for about a quarter of a century. At the same time, automation and digitization are boosting productivity. As a result, more and more people are finding it difficult to participate in the blessings of democracy. So, if we really want to save democracy, we have to do everything possible to bring these two strands back into balance and harmony. According to Confucian ethics, harmony is the highest principle, for without a fair and balanced relationship, no human community can flourish.

The way to achieve harmony is through empathy, which puts the rational and the emotional into balance. Understanding the other also brings clarity to your own perspective. The opposite of this is resentment, an abysmal emotion that is currently being stirred up by populists around the world. Germany's constitution is a masterstroke in producing this harmony. So, happy birthday to the Basic Law!

TikTok says it has over 1 billion users 3h ago