Opinion: How many deaths can we afford?

Just two weeks into this crisis some are actually calculating how many deaths society can accept to salvage the economy. For DW's Henrik Böhme, this is unacceptable. 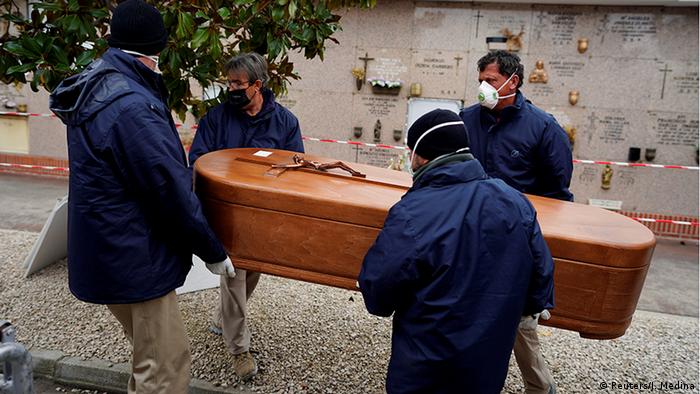 It's a question to which there is no answer — at least, to which I have no answer. But some people seem to think they know it. There's an unnerving debate going on about what we should consider more important: protecting the health of every single individual, or protecting the economy from a devastating crisis.

For decades, I have written about the economic impacts of crises of all kinds, including the 9/11 attacks or the collapse of Lehman Brothers. I even experienced the fall of an entire system — that of communist East Germany — in 1989. And now there's this virus, still invisible and unknown. It is this unfamiliarity that makes it so dangerous and also that makes us so anxious. So anxious that we accept lockdowns, restrictions to our freedom of movement and social-distancing measures. Economic and public life has ground almost to a halt, giving rise to images resembling those of an apocalypse. Rush hour no longer exists.

We're beginning to juggle bigger numbers than during the global financial crisis. The US has passed a $2 trillion (€1.8 trillion) relief package, and the European Central Bank has launched a €750 billion Pandemic Emergency Purchase Program. Such packages are being announced all over the world.

So now the question many are asking is, of course: Who will pay for them? Is it going to be like after the financial crisis when all states were in debt up to their necks? With the consequence that they introduced austerity measures and slashed spending with a devastating effect on social welfare, health care systems, education and investments. Credible medical studies conducted in Britain show that many thousands of people additionally died of cancer between 2008 and 2010 because they did not receive adequate treatment, partly as a result of such austerity measures.

Now, once again, we're talking about trade-offs. How many dead people can or do we want to afford? Or, to put it differently: How much is a human life worth to us? Are we even allowed to make such calculations, as private equity manager and former manager of Goldman Sachs' Germany operation, Alexander Dibelius, has been doing? Dibelius has publicly wondered whether it is right to protect the 10% of the population that is at particularly high risk from coronavirus while allowing the economy to be affected so badly that the fundamentals of our affluent societies could end up with permanent damage.

Is it possible to be any colder or more calculating? And this from a man who studied medicine and was a surgeon. What about the Hippocratic oath? What more is needed than the haunting and vivid pictures from Italy? Pictures of doctors who have to decide whom to treat and whom to let die. Pictures of a collapsing health system.

This is what this showdown is mostly about: preventing such collapse. For if hospitals in Germany or other countries go through what Italian hospitals have experienced, a lot of other people will die as well as coronavirus patients, such as those who have suffered heart attacks or strokes. These deaths may well be mere collateral damage for Dibelius, like the million deaths and more that Imperial College London has forecast for the US. I have a question for this medic-cum-banker: Have you read about the 20-year-old medical students in the French city of Mulhouse who had to pack the dead into body bags and transport them away?

Of course, the fact that the economy has slowed down is a huge problem. It is a problem for local bars, which can barely keep themselves above water even in good times. It's a problem for freelance theater directors who won't have any performances for half a year. For people in event management, for caterers. The list is endless.

It's also a huge problem for big companies such as Lufthansa, because right now flying is not the best business model. Or for Volkswagen, which has stopped production even though it had planned to launch a new electric car with great fanfare in summer. But this, too, shows how big the crisis really is: Although VW and many other carmakers have shut their factories because their workers' health has priority, they have recently been producing only for the stockpile, because no one wants to buy cars at the moment.

Yes, the virus is eating away at our systems, at our society, restricting our freedoms, giving us the feeling we are no longer in control, shaking our belief in the fact that we have a solution for every problem and heralding another big recession.

Still, we are not allowed to make such calculations. We are not allowed to sort out human beings. We cannot lock older people away so that the economy grows again (and in any case, young people are also dying from the virus). Scientists are, of course, aware of their responsibility; they can see the social and economic damage the current measures are causing and will adjust them accordingly.

No, we have to weather this temporary and brief pause together. We have to look after the little flower of solidarity that has emerged in this crisis in the midst of what is an extremely egoistic society. Solidarity is the real weapon against the coronavirus.

The economy will find its feet again — I'm sure of that.

Opinion: Why the United States needs to stay in Afghanistan 1h ago

Opinion: Football — no coming home until there's a coming out 7h ago

Opinion: Saudi crown prince has blood on his hands 21h ago