Opinion: Germans should get used to paying more for meat

The German government has announced reforms to the meat industry to improve working conditions. DW's Jens Thurau writes that people should think twice before buying — and eating — cheap meat. 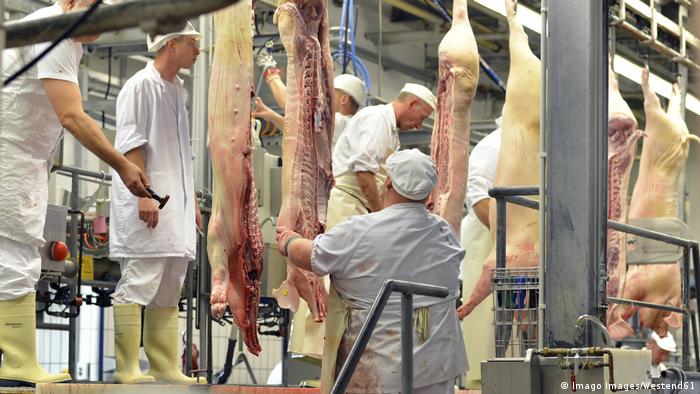 It's incredible what these disturbing times can suddenly make possible. On Wednesday, the German government announced reforms to the meat industry, saying that from 2021 there would be much stricter work regulations and the use of subcontractors would be banned. Existing fines for violating labor regulations will be doubled to a maximum of €30,000 ($32,800).

Poor working conditions in Germany's meat industry have been a controversial subject for years, but it's the coronavirus infections recently detected at several slaughterhouses in the country that pushed the government to act.

Often subcontractors hire workers from Poland, Romania and other eastern European countries, who tend to live in shared and cramped but pricy accommodation.

So far, the branch has ducked its obligations to workers by playing lip service to health and labor regulations. Supermarkets also engage in fierce battles in Germany to offer the lowest prices on the meat products that are an integral part of the country's food culture. All of a sudden, however, the government is announcing reforms that for years were deemed impossible to implement.

What will Germany's Constitutional Court say?

It remains to be seen whether the reforms will really be pushed through and end up being as strict as announced. Industry representatives are already loudly protesting. Some are saying that it would be unfair to limit a ban on subcontracting to the meat industry, while other branches, such as construction, also rely heavily on such arrangements.

If there is a legal appeal, what will the German Constitutional Court say to an industry-specific ban? It will also remain to be seen whether working conditions really improve if the branch employs fewer people in the future.

Even if the reforms are pushed through, there will have to be more official inspections and these have decreased in recent years because of a lack of staff. The authorities will have to employ more inspectors in the future.

Whatever happens, Germans should not be surprised when meat gets more expensive; consumers will just have to get used to higher prices. Many Germans love sausages and barbecues and though they live in the richest country in Europe, on average, they pay less for food and have become too accustomed to discount supermarkets undercutting each other to offer the lowest prices.

Relatively few consumers buy meat in organic food stores, and then often only on special occasions. Some people will switch their eating habits after seeing reports about the appalling conditions in slaughterhouses, others might never want to eat meat again after working in a factory. But the truth is that the majority of people do not really want to know who prepares their meat or where or how it happens as long as it's cheap.

Nothing good has come out of the COVID-19 crisis that continues to claims lives and spread suffering. But it would be a change for the positive if the crisis leads to improvements not only in the meat industry but also in agriculture, construction and health care.

Changes like that, however, are only possible if everyone contributes. In this case, by paying more for meat and eating less of it. And not looking the other way when we know that conditions are unsustainable and indefensible — as they were long before the coronavirus came along.

Twitter cracks down on accounts evading Trump ban 3h ago

Morocco recalls ambassador in Germany over Western Sahara 6h ago