Some 4 million people in Germany have Russian as a mother tongue - Russians of German heritage, Russians, Jews. Most just cultivate their gardens, but some tend the bees in their bonnets, says Alexander Warkentin. 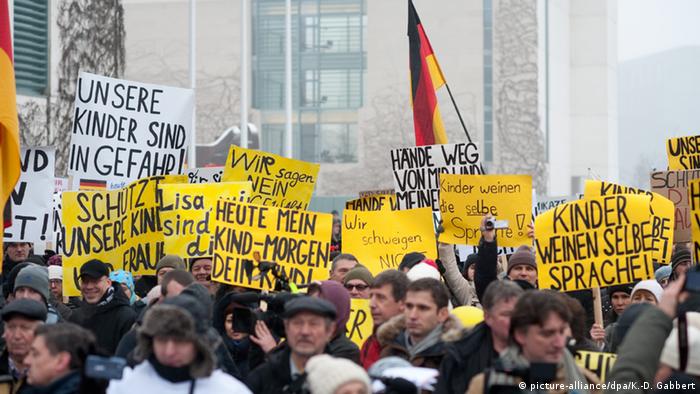 On Saturday, some 700 people demonstrated against "criminal refugees" outside the chancellery in Berlin. Many of them were Russian speakers. On Sunday the demonstrations continued in other cities: Police counted around 3,000 protesters in the state of Baden-Württemberg alone.

According to their placards, the demonstrators wanted to "protect our women and children," "German and Christian qualities," or even "German culture." The reason for the protests was the supposed rape by a supposed "refugee" of a 13-year-old girl of Russian origin in Berlin. Russian media have spread hair-raising horror stories about this "scandalous act," even broadcasting a video showing a suspected rapist. Unfortunately, that video is six years old.

It was established some time ago that the girl was neither abducted nor raped. Nor was there any indication that sexual intercourse had taken place. Even the victim's lawyer is describing it as a case of pedophilia. Sexual contact of any kind with a minor, however "consensual," is still a serious crime. The press spokesman for the Berlin public prosecutor's office has assured DW that the suspected perpetrator has already been identified. The court will have the last word. 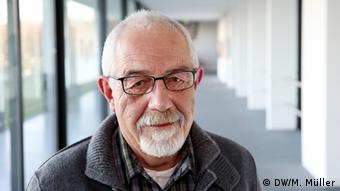 Soviet citizens live on - in Germany, too

There's one at the checkout desk in a grocery store in Bonn. She speaks fairly passable German, but prefers to speak Russian. "You won't believe where I've been! I'm so happy, so overwhelmed!" She's been to St Petersburg on holiday. No, she didn't go to the Hermitage, or to the world-famous Mariinsky Theater. She visited the birthplace of Vladimir Putin. Wasn't she bothered by the stench of cat pee there? Half of Russia jokes about it… This question bordered on lese-majeste. She doesn't say hello to me any more.

Her husband, incidentally, stayed at home. They have two televisions in their apartment. He - an ethnic Russian - prefers American detective series. She, a German from Siberia, watches only Russian television. "The Germans just tell lies," she says.

A highly intelligent acquaintance in Berlin, a tactful and tolerant man in everyday life, loses his composure as soon as conversation turns to the conflict in Ukraine. He is convinced that the Ukrainian "fascists" crucify children and burn women alive. They showed the "irrefutable" evidence on television, he says.

Which television? Russian, of course. He doesn't watch German TV. "The stupid Germans shouldn't interfere. We Slavs will resolve the conflict by ourselves," he says - forgetting, as he does, that he came to Germany as a Jewish "quota" refugee.

Everyone has their own 'cockroaches in their head'

In Soviet times people were always making jokes about the television. It's understandable that this traditional mistrust has been transferred to the German media. What's incomprehensible, though, is that they believe the unbridled propaganda disseminated by Moscow today.

Or perhaps there is something that makes it understandable. Most Russian-speaking German citizens had to leave behind all their possessions, everything they owned, when they left for Germany. What they brought with them was their minds, their upbringing. Social scientists call it socialization. A Russian saying calls it "cockroaches in the head."

The majority like living in Germany and are happy here. Some, like the singer Helene Fischer, have even achieved fame. Hardly anyone wants to go back to Russia or Kazakhstan, unless it's as a rich visitor from the West.

But some still don't feel at home in Germany, even after 20 years. The longer they continue to see it as a foreign country, the more they idealize the land of their youth in their memories. As a result, they're susceptible to all kinds of conspiracy theories: Russian propaganda and rabble-rousing by PEGIDA, LEGIDA, AfD and the NPD are just the ticket.

Another element to factor in is the craving for recognition: sometimes a bunch of failures try and set up a political party of ethnic Germans from Russia, or head up a demonstration against a rape that never happened. Conspiracy theorists, of course, suspect that money from the Moscow propaganda fund is behind all this.

But many of these people are joining in out of their own sense of conviction and genuine outrage. They're not interested in hearing facts. Because, after all, everyone has a right to have their own cockroaches in their head - or rather, their own bees in their bonnets.

You can comment on this article below. We look forward to hearing your opinion! The thread for this editorial will close 24 hours after publication.

Estonia hit by cyberattacks after Soviet memorial removal 8m ago