President Donald Trump's delay of his decision on punitive tariffs shows he is not interested in settling the dispute. He is simply addicted to attention and needs a stage. That's dangerous, says Bernd Riegert. 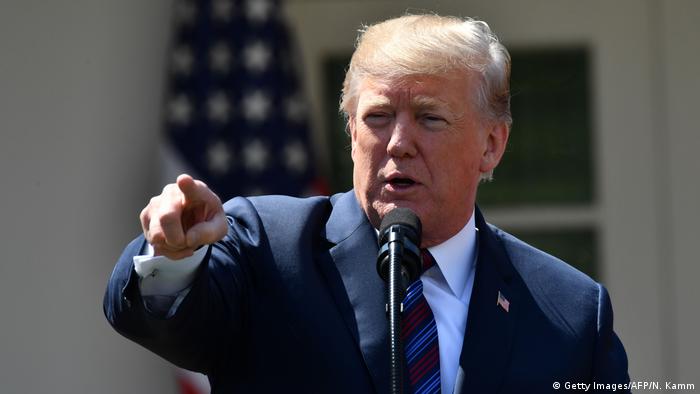 The drama surrounding the punitive tariffs on steel and aluminum with which the US is threatening its trading partners has entered the next round. Only hours before an arbitrarily set deadline was reached, President Donald Trump ordered another four weeks of limbo in which he wants to impose his terms.

This is trade policy following the script of a television show — much like the one Trump once starred in for years — with its unexpected twists and cliffhangers. Most importantly for him, the quota is right and people are watching him, the angry nationalist in the White House, who is supposed to make his country great again.

Read more: German minister: EU should not risk trade war with US over tariff dispute

Even coaxing from France's President Emmanuel Macron and Germany's Chancellor Angela Merkel in the past few days hasn't helped. This president does not value his allies. He rebuffs them like candidates on "The Apprentice." For him, he is the only one who counts. The "Trump Show" must go on, even if in the end the American economy suffers.

Now, the haggling will continue until June. The US president and his trade advisers have made it clear to the EU that they want to dictate the conditions for the trade in steel and aluminum. They are demanding a quota on imports to protect unprofitable US steel makers. This idea is contrary to the current principles of free world trade, which the United States itself helped create with the World Trade Organization.

So far, only South Korea has agreed to such a quota system, because it does not want to alienate the US, it military protector. Canada and Brazil, the US's main suppliers of steel, may be hoping for better terms.

But the European Union must not yield to this blackmail attempt from the White House. It is unacceptable that the US can threaten others with tariffs — which are most likely illegal — in order to prop up its own economy. Talks can only continue with this president if the proposed punitive measures are off the table. And then, the talks must be wide-ranging bargaining about the tariff regime across all sectors and not only for one or two industries.

It's all about the uproar

First and foremost though the EU must be united and stand up to the US. If the Trump model works for steel and aluminum, the volatile president would surely try it in other areas like car imports. Using quotas to protect the US steel industry — whose products Americans do not want to buy — is absurd. Even American companies have spoken out against Trump's proposals. What the economic nationalist in the White House calls "unfair" is the result of years of market development.

No one has forced American customers to buy European specialty steel. It's just better or cheaper, or both. It is a fantasy to think that the US steel industry would be in a position to make enough of the products needed to cover the sudden import shortfalls. Supply chains in the US would be hit, and goods would likely become more expensive for American consumers.

Trump, a self-obsessed macho man, is not able to grasp the economic reality of an interconnected world. For him, it's all about the uproar he can create. He wants attention, and with this delay has now secured for another four weeks of headlines for himself.

But the EU has no reason to be timid; it is an economic power equal to the US. Even the UK is on board, despite its own problems with Brexit and future trade negotiations with the Americans.

So Donald Trump wants to talk? Then let's talk about tariffs on all major product groups and about a new comprehensive customs agreement that could be "fair" in his eyes. Yet such talks would quickly turn to the US trade deficit or the surpluses in the euro zone, especially in Germany.

Deficits, like in steel, have nothing to do with unfairly forcing Americans to buy European goods. They just want them. The growing American economy needs them. Having said that, this consumption has been financed by many years by ever-increasing debt — debts in China and Europe. This leads to an enormous outflow of capital, which is not necessarily good for our own economic development. Consumption and investment in Europe are too low.

That's just how it is. But trade policies or even tariffs cannot fix these imbalances. For its part, America has a trade surplus in the financial services, education and tech sectors. This is where the US makes big money. Does President Trump want to renegotiate that too? Is that fair?

Islamic State 'Beatle' sentenced to life in prison 2h ago