Steel tariffs: EU and US hold talks as deadline looms

The EU’s top trade official Cecilia Malmstrom spoke with her US opposite number ahead of a deadline that could see tariffs imposed on EU metal exports. Brussels could impose levies of its own on some US products. 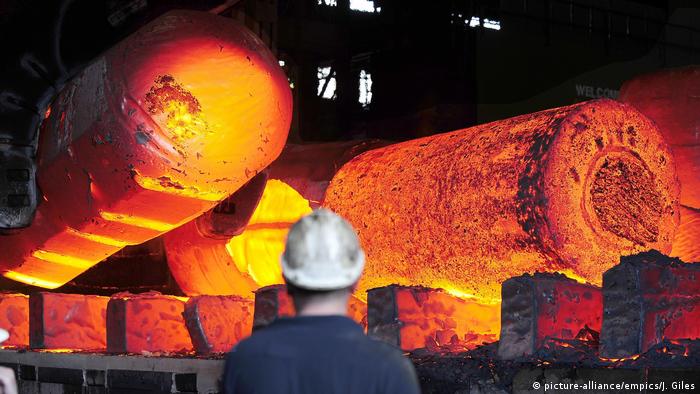 European Union Trade Commissioner Cecilia Malmstrom spoke to US Secretary of Commerce Wilbur Ross by phone on Monday, to discuss whether Europe will remain exempt from tariffs on metals being imported to the US.

The conversation took place ahead of the expiry of a waiver, at midnight US Eastern Standard Time (0400 UTC), that temporarily exempted the EU from aluminum and steel tariffs imposed by US President Donald Trump.

"The only thing that I can tell you today is that we are patient, but we are also prepared," European Commission Spokesman Margaritis Schinas said.

US Treasury Secretary Steven Mnuchin has said President Trump has not yet made a decision on whether any countries should receive extended exemptions. "The president has not made any decision yet," Mnuchin told Fox Business Network.

German Economy Minister Peter Altmaier on Monday said the EU should present a specific offer to the US, and should continue talking even if trade tariffs were imposed. "I believe we must continue to negotiate whatever happens," he said, adding that the aim of the negotiations should be to reduce tariffs in general.

Read more: Germany, the US and non-free trade

What could Europe do? Europe has earmarked certain American imports — iconic items such as Harley-Davidson motorbikes, blue jeans and bourbon whiskey — for retaliatory levies. The EU's three largest economies — Germany, Britain and France — held crisis talks on Sunday. Afterwards, the French presidency said they had agreed "the EU must be ready to act, if necessary, with efficiency and speed," if Washington were to press ahead with the tariffs.

Changes to free trade deals: South Korea has had the waiver extended after agreeing to revisions of its free trade agreement with the US. Canada and Mexico could see an extension to their waiver, if the Trump administration deems that enough progress has been made with the US on the North American Free Trade Agreement (NAFTA), which Trump claims is unfair to the US.